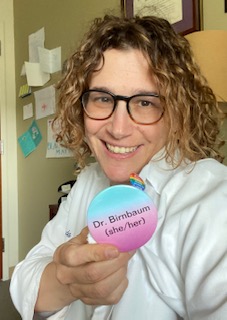 As many of you know, June is Pride Month, a time when we come together to support the LGBTQ+ community. Most often it is marked by parades and festivals. I am hoping to use this month to raise awareness around caring for transgender patients.

Many doctors may say they don’t have any transgender patients in their practices, but the truth is you may not know. Although many electronic medical records, such as Epic, have space to put in pronouns and names, some used in private practices do not.

Looks Can Be Deceptive

This past week I met a new patient. He had a female name and long hair. I have been introducing myself to new patients, especially younger ones, with “Hi, I’m Dr. Birnbaum. My pronouns are she/her. How about you?”

When this patient told me his pronouns were he/him, I asked his name. It was a male name rather than the birth name on his insurance card and chart (often referred to as a dead name in the transgender community). Had I not asked, we might have gone through an entire appointment without me knowing. This patient has not been able to access gender-affirming care yet.

For many transgender and non-binary patients, the anxiety of registering for a medical appointment, having that name called out when waiting to be roomed, and wondering how and if gender will be part of a discussion is so overwhelming they don’t seek care at all.

How do I know this?

This past August, my 11-year-old told us he felt like he was more a boy than a girl. Within weeks, he had cut his hair short, changed his name and asked us to begin using he/him pronouns. My child was now a part of a vulnerable patient population, and I had embarked on one of the steepest learning curves ever.

We are extremely fortunate to live where we do, have access to the Children’s Hospital of Philadelphia (CHOP) gender clinic and have family that is open to him. He attends a very inclusive school, and swims and plays basketball with supportive teams. This has not been easy, but my son feels affirmed, and we are working hard to support him.

There has been anxiety along the way. One huge hurdle is waiting for his name to be called at various doctors’ and dentists’ offices, laboratories, etc. I usually call ahead to remind them. All forms I have come across have places for him to identify, but inevitably mistakes still happen and cause him embarrassment and sadness. The statistics about rates of depression, anxiety and suicide in this population are both abysmal and alarming.

Pronouns meant little to me even just one year ago, but their proper use means everything to me and my family now. I still stumble and misgender my son, but not as much as I did initially. It takes practice, and we appreciate anyone who tries. A quick apology without dwelling on the mistake is most effective. I am so proud of my kid and amazed that he can know himself and express himself the way he has. I know how fortunate he has been to have access to resources and support that many do not have.

I told my son about my patient encounter and how much I appreciate what he has taught me. He has given me permission to share my thoughts with you.

Please join the effort of inclusivity by using your pronouns when you identify yourself to your patients, sign your emails and sign in to Zoom meetings. This will deconstruct the notion that gender can be assumed and de-stigmatize those who have pronouns that don’t align with their names or appearance. This will make us better doctors.

Compared with heterosexual youth, LGBTQ young people are more than twice as likely to feel suicidal and over four times as likely to attempt suicide; the rates may be especially high for bisexual teens. According to one study, a third of transgender youth have seriously considered suicide, and one in five has made a suicide attempt.1-3