Sara Alehashemi, MD, MPH, recalls the first time she ever stepped foot on a badminton court. It was back in 2003, when she was a 24-year-old medical school student at Hormozgan University of Medical Sciences (HUMS) in Iran.

She was completing a rotation in orthopedic surgery and had been teamed up with another medical student who served as captain of the school’s badminton team.

“She was a year ahead of me so we never met before in any of our rotations,” says Dr. Alehashemi, a rheumatologist and research fellow at the National Institute of Allergies and Infectious Diseases (NIAID) in Bethesda, Md., who was also awarded ACR’s Distinguished Fellow Award in 2018. “She was impressed with my hand dexterity and invited me to train with her team for a couple of days.”

Since then, Dr. Alehashemi has been playing badminton—both for fun and in competition. She says the sport, which is as popular in the Middle East as tennis is in the West, is far more than a competitive outlet. For the past 14 years, it has helped her integrate with her local community, interact with people outside of science and, unlike her research job, offers immediate gratification every time she makes a kill shot or her team wins a game.

After graduating from HUMS in 2006, Dr. Alehashemi completed a surgical and medical internship in the U.K. at Weston Area NHS Trust from 2007 to 2008. Then she moved to the U.S., where she held a variety of positions over the next decade before assuming her current role in 2018: research assistant, Miami Cardiac and Vascular Institute; research assistant, Molecular Imaging Lab, University of Pennsylvania, Philadelphia; medical intern, Lincoln Hospital-Weill Cornell Medical College, NY; medical resident, Pennsylvania Hospital-Penn Medicine; research fellow, Molecular Imaging Lab, University of Pennsylvania, and rheumatology clinical fellow, National Institute of Arthritis and Musculoskeletal and Skin Diseases. 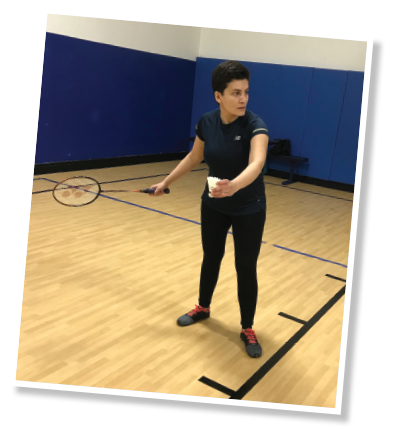 Dr. Sara Alehashemi practices her serves at the local gym.

This past October, she also completed her Master of Public Health at Johns Hopkins University, Baltimore, specializing in epidemiology and data science.

No matter where she has lived, badminton has been a constant in her life. She now plays every three weeks with her five-member team that is named after the local gym—Columbia Gym—where she also trains three times a week after work with a personal trainer.

During one recent training session, she developed a solution to a nagging problem involving data analysis she had been working on that morning. This wasn’t the first time something like this has happened.

“Right now, I’m working on an experiment involving epigenetics [biological mechanisms that switch genes on and off],” says Dr. Alehashemi. “I can scientifically prove that physical activity helps a wide variety of organs function well. Besides the musculoskeletal system, the nervous system and even immune system work better if you exercise regularly.”

Like tennis, badminton requires players to be responsive and quick on their feet. The difference between the two sports is that in badminton, the court is roughly one-quarter the size of a tennis court, the racquets are much lighter, and instead of balls, players hit shuttlecocks (also called shuttles or birdies), which are made from feathers embedded into a rounded cork base.

Perhaps the sport’s most difficult challenge is learning when to change your body speed. Dr. Alehashemi explains that smart opponents can figure out how you move, if you’re fast enough to hit the birdie from anywhere on the court and the degree of your eye-hand coordination.

“You can be a powerful player, smash the shuttle, but if your opponent hits the shuttle close to the net, you really need to have great foot movement,” she says.

While she was in medical school, Dr. Alehashemi’s team played in a national competition. Her most memorable athletic moment occurred in Tehran in 2004, on the third day of a national championship. It was winter, snowing and very cold. During the outdoor opening ceremony, the crowd was cheering, and Dr. Alehashemi and her team members were enjoying the moment. But by morning, she had developed a bad cold and fever.

“I really had to stick up for my team,” she recalls. “So I played my double match with my fever and another team member. Although we lost the championship, we won that game. I was pretty proud of that.”

Over the years, Dr. Alehashemi says that badminton has taught her patience and persistence, which she applies in both her personal life and her job as a junior scientist.

“Whether I’m working, playing or training, I need to take things step by step and build on my abilities before moving naturally to the next step,” she says. “Otherwise, I’ll burn out, won’t be able to finish and risk injuring myself.”

Back in 2004, Dr. Alehashemi overworked a leg muscle while training and dislocated her right knee cap, which immediately swelled. Since then, that knee has been prone to similar injuries.

She believes that’s a small to price to pay for playing a sport that has added multiple dimensions to her life. Everywhere she has lived, she says badminton has helped her connect to the community and develop strong friendships with people representing all sorts of backgrounds, perspectives and lifestyles.

“Badminton helps me live better in my own world,” says Dr. Alehashemi.