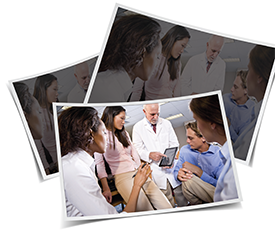 Questions, concerns and spirited debate have surrounded the Graduate Medical Education (GME) system for decades. The program that trains nearly 120,000 physicians per year is under constant scrutiny.1 Changes to the political landscape, combined with ongoing efforts by health industry payers and regulators to squeeze inefficiency out of the system, have kept the GME in the spotlight.

Key issues tied to the GME program—the future of the physician workforce, patient access to primary and specialty care, teaching physician compensation, Baby Boomers and growing patient volumes—are just as important to rheumatologists as they are to legislators, administrators and economists.

“The current system is flawed in that it doesn’t incentivize high-quality programs or allow for developing programs to address future needs,” says Kristine Lohr, MD, MS, professor of medicine, interim chief of the Division of Rheumatology, and director of the Rheumatology Training Program at the University of Kentucky School of Medicine in Lexington. The current system favors procedure-based specialties and subspecialties. There are more training slots for surgery, GI, cardiology, pulmonary and critical care, than for the cognitive subspecialties, such as rheumatology, endocrinology and infectious diseases.

To address some of the nation’s issues with physician training, the Institute of Medicine (IOM) in July 2014 released a seminal report on GME programs and funding. Titled Graduate Medical Education That Meets the Nation’s Health Needs, the report called for “significant changes” to the GME system and produced five recommendations for reform, along with suggested goals and next steps (see Table 1).

Led by former CMS Administrator Don Berwick, MD, and inclusive of more than 20 leaders in medicine and business, the IOM committee’s examination found the financing and administration of the GME program had a “striking absence of transparency and accountability.” Some $15 billion a year in funding, according to the report, isn’t the problem.

“More government money isn’t the issue. What is important is spending it smarter,” says Gail Wilensky, an economist, former Medicare administrator, and chair of the IOM’s Committee on the Governance and Financing of Graduate Medical Education. “It is an unusual role the federal government has taken here, and it should continue on the ground if it can become more focused on meeting this goal of hoping to transform a workforce for the 21st century—and do so in a way that is more transparent and accountable for achieving its goals, which we think it has not done in the past.”

Wilensky says the IOM report did not attempt to address the type or quality of physician training, but focused narrowly on the end results and how public funds achieve “policy goals reflecting the health needs of the nation.”

The report’s recommendations were:

“The training ought to produce a physician workforce that is focused on the triple aim of better care, lower cost and more population focused,” Wilensky says. “We recognize these are changes that CMS cannot do in itself [and] require legislative changes that are not administrative.”

The IOM report drew immediate response from advocates and adversaries alike. The Association of American Medical Colleges (AAMC), the American Hospital Association (AHA) and the American Medical Association (AMA) were quick to criticize the recommendations. According to a policy paper in the New England Journal of Medicine, the physician groups “were dismayed by the failure of the report to recommend an increase in the number of Medicare-funded GME positions, and by the fact that it rejected estimates of a growing national shortage of physicians.”2

Darrell Kirch, MD, CEO, of the AAMC, says the recommendation to redirect 35% of GME payments to the transformation would “slash funding for vital care and services available almost exclusively at teaching hospitals.”3

In a July 2014 article, the AMA agreed that changes to the GME system are needed to address impending workforce shortages, but doubled down on the theories that more funding and more training spots are a better way forward.4

“Despite the fact that workforce experts predict a shortage of more than 45,000 primary care and 46,000 specialty physicians in the U.S. by 2020, the [IOM] report provides no clear solution to increasing the overall number of graduate medical education positions to ensure there are enough physicians to meet actual workforce needs,” former AMA President Ardis Dee Hoven, MD, says. “The AMA believes the number of residency slots must be increased to produce an appropriately sized and geographically distributed physician workforce to accommodate our country’s future health care needs.”4

According to the report, the AMA has lobbied Congress to support the Creating Access to Residency Education Act of 2014 (CARE Act), which would use federal monies for new residency positions, and supports “state legislation to increase funding to train more physicians to meet local workforce needs.”

Congress, however, seems to be leaning in a different direction—siding more closely with the IOM recommendations. With Republicans surging to majorities in both the House and Senate in the 2014 mid-term elections, GOP leaders have pledged to use the budgeting process to scale back the GME program.2 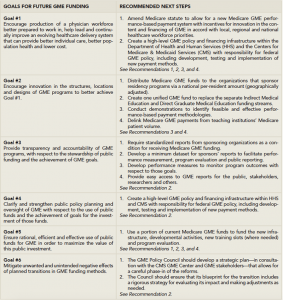 Dr. Lohr, who is a member of the ACR’s Committee on Rheumatology Training and Workforce Issues and has been teaching residents since the 1980s, says she has “mixed feelings” about the IOM recommendations. She disagrees with “diverting” existing monies to create new programs and bureaucracies, but a number of the IOM’s suggestions resonate with the training community.

“We need stability and flexibility in funding to be able to plan for the future and deal with changes in the healthcare environment,” she says. “Incentives for working in identified shortage areas are key. The ability to be flexible, to meet fluxes in provider shortages, and patient access issues are key.

“Regarding those who train, ACGME and specialty/subspecialty boards need to be involved to ensure that trainees in rural vs. urban areas meet the highest standards of care—and continue to maintain those standards.”

Dr. Lohr says she “cringes a bit” at the idea of performance-based GME funding. With no details on what that means and a training community fresh off major changes in resident-duty hours, she worries that could mean “clicking more boxes” in electronic health records.

However, she does think a few of the IOM’s suggested goals and next steps could benefit rheumatologists and their patients. The first two goals address a better prepared and “continually evolving” physician workforce, and “encourage innovation in the structure, location and design” of GME programs.

“Those goals (and recommended next steps) might lead to true team-based care,” she says. “Having true team-based care in the ambulatory setting would be superb. To provide complete care to patients with chronic pain or fibromyalgia, for example, the team should include social workers, psychologists and PharmDs.

“Right now, we don’t have them in our clinic because there is no financial mechanism to pay for them. Delinking Medicare GME payments from teaching institutions’ Medicare patient volume sounds promising.”

Before any of the recommendations or next steps come to fruition, Congress would have to act. Many pundits think that the potential friction with a healthcare industry still reeling from the changes from the Affordable Care Act isn’t worth the trouble, and that the status quo is just fine. Wilensky says that kind of thinking is short-sighted.

“We are not criticizing the clinical and technical competency with which the physician community is trained,” she says. “It’s recognizing that in an aging population with multiple chronic diseases, just training more super specialists is not likely to meet future healthcare needs.

“It’s the importance of allowing for the kinds of physicians, and the focus of the training of working in team-based care, and focusing on improved health outcomes, as being where the healthcare delivery system we hope is trending as we go forward through the 21st century.”