You are here: Home / Articles / March Madness on the High Seas: Hoops and Healthcare as Bedfellows
Print-Friendly Version / Save PDF

The weekend of March 20 and 21 saw the confluence of two great media events in America: the first two rounds of the NCAA basketball tournament and the final push to pass healthcare reform in Congress. While these events are light years apart in their historical significance, they nevertheless both occupied thousands of hours of television and generated intense passion and debate. Who could have guessed that they would compete so strongly for attention in the public imagination?

Being both a political and sports junkie, I was disappointed to be out of the country during this momentous time. While starved for the relentless 24/7 coverage on the airways, I could not really complain because I attended a wonderful scientific meeting on anti-DNA antibodies. The meeting venue was a 600-passenger cruise ship called Trollfjord that motored up and down the coast of Norway from Tromso to Kirkenes. The science was great, the company congenial, and the scenery spectacular.

Norway at the beginning of spring is like the dead of winter in North America. The locals are nevertheless happy because the sun has emerged from its captivity below the horizon. Once free, the sun revives a world that has been submerged in darkness for months. As I learned on the cruise, the weather in Norway is fickle, and the sun can quickly retreat behind clouds. A frigid wind then comes roaring out of the North as the last supply of snow dumps out from dense gray clouds. In the fjords, the wind is bracing, exhilarating in its bite and able to burnish a face red in a few seconds. Out at sea, the wind whips up the waves, which maliciously rock a ship up and down, to and fro, and side to side, challenging even the heartiest vestibular system. 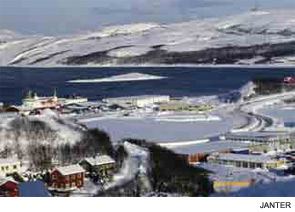 A cruise ship docked by the quay in Kirkenes.

Perhaps to divert themselves from the boat’s fierce bouncing, the American contingent at the conference regaled each other during meals and breaks with talk of the fall of the vaunted tournament seeds, the inspiring exploits of Cornell, and the prospects for a vote in the House of Representatives to enact healthcare reform. Let us be honest. Many, if not most, academic researchers can be considered as politically liberal insofar as they support an active role of government in the healthcare system. This viewpoint should not be a surprise because a large chunk of funding for research and training comes from the government. The National Institutes of Health (NIH), the Veterans Administration (VA), the Department of Defense, the Centers of Disease Control and Prevention, and the Food and Drug Administration all contribute significantly to the academic enterprise.

For decades, the academy has depended heavily on dollars coming from Washington. Whatever their politics in other realms, investigators want government funding of research to grow. “Starving the beast” as a policy direction means starving them. That includes my buddies and me on the Trollfjord. Buoyed by the influx of American Recovery and Reinvestment Act money, investigators are especially happy with the government now, appreciative of the administrators and staff in Bethesda and Rockville, Md., who keep the system humming along in a remarkably open and fair way. To those in the research trenches, the NIH people are unsung heroes. On the clinical side, Medicare and the VA are big sources of funds for the academic centers. A substantial piece of all house staff training occurs at the VA, and a nice red brick hospital in the neighborhood of a Mecca is a welcome sight for many a dean.

Although those in practice may view the government’s presence in healthcare differently than their colleagues in research, change in the healthcare system has and will continue to be a major priority for them as well. Anyone confronting the ardors of caring for the sick in a fragmented and troubled insurance system has to acknowledge the necessity of reform. There is a terrible irony in realizing that, while science can dissect the molecular defect of a patient with lupus to the level of a single cell, that patient may succumb because she has no way to pay for CellCept when the wolf comes calling at her door.

The wind and waves off the coast of Norway had conference speakers clinging to columns while giving their talks and speeding through their presentations in order to race for Trollfjord’s deck for a breath of fresh air.

The debate in Congress dragged on during the weekend and, with the time zone difference, I went to sleep on Sunday night not knowing the outcome of the final vote. The next morning, our boat was far out at sea, bumping wildly in the last hurrah of Scandinavian winter. The first thing I did after my alarm clock beeped was to turn on my BlackBerry to find out the Congressional vote. Alas, I was out of transmission range. The television was no better, featuring the highlights of the Liverpool–Manchester United match. After showering, I hurried off to the dining room, as the Trollfjord teeter-tottered in the waves.

At breakfast, I saw a friend with whom I had discussed the prospects of a Duke run to the championship after its recent drought of Final Fours. He flashed a big smile and excitedly said, “220–211!”

I knew exactly what he was talking about but, in view of all the hoops talk the night before, I could not help making a lame joke. “That’s an awfully high scoring game,” I said. “The defense must have been terrible.”

My friend then filled me in on the details of the House vote, and off we went to lectures on tolerance checkpoints, B-cell editing, and nephrogenicity.

When I gave my lecture later that day, a storm was at its peak, half the audience was seasick, and I had to hold on to a pillar for dear life lest a lurch of the boat send me catapulting into the audience who were either unexcited by my data on microparticles or were about to heave. I learned quickly that turning my head to look at my slides was a risky maneuver, stressing an equilibrium system about to collapse. I spoke at an unbelievable pace so that I could get outside quickly to fix my eyes on the horizon even if I would be blown apart by the Arctic wind.

When my session ended, I raced out to the deck without stopping to get a coat. Outside, the gusty wind and pelting of snow on my face did their magic, miraculously squelching a powerful reflex to throw up. Despite the duress of lecturing on the high seas and anxiety over the struggles on the hard woods and the halls of Congress, I felt happy. Nature was resplendent. I was with good friends, March was turning to April, and I hoped that a time of madness was finally ending.