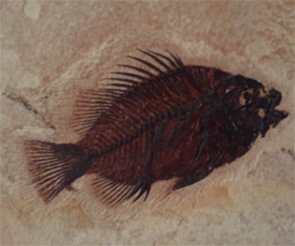 A 50 million-year-old Priscscara fossil fish from the Green River formation in Wyoming.

When Rodolfo “Rudy” Molina, MD, was 8 years old, a college recruiter visited his home. Unbeknownst to his parents, their son, now a rheumatologist at Arthritis Associates in San Antonio, Texas, had entered several of his drawings in a competition intended for high school students. The recruiter, unaware of the young artist’s age, was definitely impressed by his talent and had planned on recruiting him.

“He smiled and asked if I did these drawings,” recalls Dr. Molina, who reluctantly nodded, hiding behind his mother’s skirt. “He said maybe I could attend his college when I got a little older and gave me his business card, which I quickly lost.”

Also as a boy, Dr. Molina could often be found digging for fossils in various riverbeds surrounding his hometown of Corpus Christi, Texas.

For as long as he can remember, Dr. Molina has enjoyed two hobbies: drawing and collecting fossils. However, he chose to pursue a career in medicine instead of art or paleontology.

Dr. Molina attended Baylor College of Medicine in Houston, graduating in 1976 and completing his residency at Baylor in 1979. The recipient of a U.S. Air Force scholar­ship, he spent the next nine years in the military as chief of rheumatology at Malcolm Grow Medical Center in Washington, D.C. During his military service, he completed his fellowship at Johns Hopkins University in Baltimore in 1982 and spent six years as director of a combined rheumatology program between Malcolm Grow and Walter Reed National Military Medical Center in Bethesda, Md. 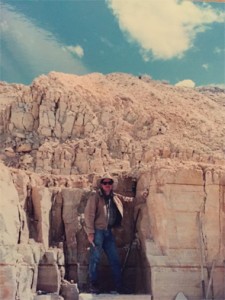 Dr. Molina on a dig in western Wyoming near the Green River Formation.

After moving to San Antonio in the early 1990s to work in private practice, Dr. Molina attended a rock show and became fascinated by some fossils of trilobites, which are marine life that lived more than 550 million years ago. He befriended the vendor selling them, and his passion for fossil hunting was quickly renewed.

For more than a decade, he spent many weekends traveling with a group of paleontologists on digs around the U.S. and Mexico and read many books on fossils that explained when, where and how ancient land and sea creatures lived.

“I’m not sure I really discovered anything, but [I] did collect some fascinating ammonites,” he says, explaining that these sea creatures lived inside a shell, like a big snail. “I found a lot of fish fossils that are fairly common, and also dinosaur bones and one T. Rex tooth, along with a toe.”

Throughout the years, he has amassed quite a collection of fish fossils and dinosaur bones that he has stored in his home garage. The collection—which numbers in the hundreds—leaves neighborhood kids awestruck and impresses amateur paleontologists, he says.

Although enamored with the past, the present began to demand his attention. By 2003, Dr. Molina wanted to spend more time with his wife, Blanca, and their three children, Eric, Emily and Sarah, ages 14, 13 and 10. “I found myself spending time with them, having fun with them while they grew up,” he says, and he began to turn down invitations to go on digs.

Still, Dr. Molina is proud of his fossil collection, which, like his art, captures moments in time.

While working and raising his family, Dr. Molina needed a creative outlet and turned to painting—more specifically, painting people’s portraits or people in motion. His office displays many of his original works, including several paintings of patients.

“This one patient I painted was an old cowboy,” he says, adding that he uses multiple photos of patients to paint their portrait. Dr. Molina brought the finished piece to his office, eager to show the man his portrait during his next visit. However, the patient believed there was little, if any, resemblance. Somewhat disappointed, Dr. Molina hung the painting in his office anyway.

A few years later, the man’s daughter called Dr. Molina, asking if she could snap a photo of the portrait to show her father, who was on his deathbed and requested to see it. “I was honored that he remembered, and [I] said the painting belongs to your family, but she never showed up,” says Dr. Molina. The painting still hangs in his office today.

Over the past decade, Dr. Molina has enrolled in two portrait-painting classes taught by famous American artists, Daniel Greene and Ramon Kelley. He spent some time painting with pastels and acrylics in Mr. Kelley’s studio in Denver. Mr. Kelley critiqued his art, believing he was more skilled at working with pastels than acrylics. “I shy away from pastels,” says Dr. Molina. “They’re so messy with all the powder. I just don’t like cleaning up afterward.” 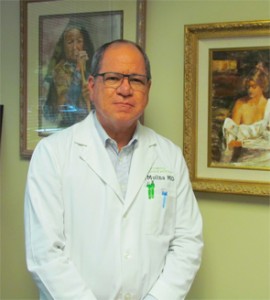 Dr. Molina in his office, surrounded by his paintings.

On occasion, he has sold his paintings, but with regrets. He says he could never earn a living as a painter, because it’s too hard to part with his art, except when it’s being sold for charity. However, he hosts parties in his home for Mr. Kelley and other artists so they can sell their paintings and network with Dr. Molina’s friends, who are art collectors.

Meanwhile, Dr. Molina says his key challenge is finding time to paint. He already knows what his next project will be, perhaps his own Mona Lisa. He wants to paint people waiting at a bus stop; sitting, standing, leaning, interacting with each other or talking on their cell phone, all against the city’s backdrop. He has contacted several professional photographers to take photos of various bus stops throughout the day to feature different shadows and lighting, but has not yet hired anyone.

Dr. Molina says many physicians are so caught up in their patients and work that they abandon their interests outside of medicine. He believes, however, that doctors owe it to themselves to explore their different dimensions as individuals.

“All of us are people, not just rheumatologists,” he says. “I really believe that having these other outlets or hobbies makes you a better person, more creative in how you think through things.”