You are here: Home / Articles / Rheumatologists on the Move, July 2016
Print-Friendly Version / Save PDF 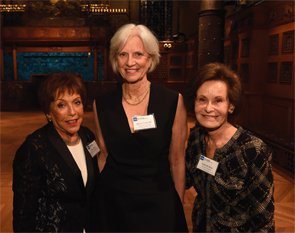 Mary “Peggy” Crow, MD, chief of the Division of Rheumatology at HSS with Renee Flug (left) and Susan W. Rose, who serve as co-chairs for HSS’s Rheumatology Council.

The Hospital for Special Surgery (HSS) in New York City hosted a Rheumatology Gala in May. The event, held at The Park Avenue Armory in Manhattan, was held to increase awareness of HSS’s leading research and treatment of rheumatic diseases—particularly with “high-net worth people,” according to former ACR President Mary “Peggy” Crow, MD, chief of the rheumatology division of HSS and one of the featured speakers. “Not that many people know what a rheumatologist is,” she adds. With National Institutes of Health funding low these days, it is increasingly important to raise awareness of rheumatic diseases and their treatments. “The gala was great. Any division could benefit from increasing awareness [of its work],” says Dr. Crow.

Dr. Crow is a senior research scientist at HSS, with a primary research focus on lupus. That research has been a stimulus to developing new therapies that target interferon by inhibiting its production or blocking its action. She was inducted into the Rheumatology Research Foundation’s Honorary Board of Directors last year at the ACR/ARHP Annual Meeting. While Dr. Crow was president of the ACR from 2005–2006, the ACR donated $5 million to the Foundation to help launch its $30 million Within Our Reach: Finding a Cure for Rheumatoid Arthritis campaign. She is also an ACR Master, the highest recognition the College bestows. The title goes to members “who have made outstanding contributions to the field of rheumatology through scholarly achievement and/or service to their patients, students, and profession,” according to the ACR’s website.

Padmapriya Sivaraman, MD, recently joined Rheumatology Associates in the Dallas-Fort Worth area. She is the 15th board-certified rheumatologist recruited to one of the country’s largest rheumatology specialty practices.

Dr. Sivaraman received her medical degree from Kasturba Medical College, Manipal University in India. She grew up in the U.S., but her family moved back to India after she graduated from high school. Kasturba offered a six-year program that took her straight from high school through medical school.

The training she received in India may have given her an edge as a diagnostician. “I learned clinical skills there, because there aren’t funds for diagnostic and laboratory tests,” she says. “That experience makes me appreciate all that I have now,” she adds.

She returned to the U.S. for her internship, residency and a rheumatology fellowship at Case Western Reserve University. During her internal medicine residency, Dr. Sivaraman did an elective in rheumatology, “because I didn’t know much about it. I wanted to explore and learn more.” She found a connection. “The clinical work was challenging, and I enjoyed the puzzle-solving aspect.” Another plus of the specialty for her is the work and personal life balance it offers. “Rheumatologists are happy doctors,” she says.

Dr. Sivaraman particularly liked her mentors and the scientific research at Case Western. “The advances in research keep it interesting,” she says. Because her mentors were entering retirement range, she started looking around for her next place to work. As a former Southern California girl, she ended up narrowing her search to three options in Texas—another warm environment. Rheumatology Associates won out. “It seems the perfect place to grow,” she says.

The staff includes three American College of Rheumatology past presidents. “That’s quite a recommendation,” she says. “I am very fortunate to be here.”

Eyal Kedar, MD, rheumatologist, is on staff at St. Lawrence Health System, Canton-Potsdam Hospital in northeastern New York. He received his medical degree from the University of California, San Diego, but the move from California to New York is hardly the longest journey for him. Dr. Kedar was a high school physics teacher when he decided to join the Peace Corps. He spent three years in the Kingdom of Tonga. After that time in the tropics, Dr. Kedar found himself curious about infectious diseases, so he enrolled in medical school. He spent a year doing HIV research in the San Diego area.

During his combined clinical and research rheumatology fellowship at the University of Washington in Seattle, he spent three years doing bench research on an enzyme in lupus. “My interest was the interface between immunology and metabolism. Immunology is what brought me to my [rheumatology] fellowship.”

His current situation suits him well. He loves the combination of clinical work and research. He’s able to devote 10 hours a week to research, while dealing with patients both in and out of the hospital. “Solving hard cases is rewarding.” He is the only rheumatologist in the geographically largest county in New York. The largely rural, under-served population includes patients who were both long undiagnosed and long untreated. New patients face a six-month waiting list, but he hopes to add more mid-level staff this year.

Only Pediatric Rheumatologist in County

After an educational career that took him from Florida to New Jersey then to Kentucky and North Carolina, Brett Smith, DO, is now in eastern Tennessee, working as the only pediatric rheumatologist in Blount County. He’s now on staff at Blount Memorial Hospital and is a member of East Tennessee Medical Group in Alcoa, Tenn.

Dr. Smith says, “I took a rheumatology rotation in preparation for boards. Plus, my mother has psoriatic arthritis, and I didn’t know much about that.” He says, “I thought I wanted to be procedure oriented in my career, but” during the rotation, he found he enjoyed the complexity and diversity of the conditions and the patients.

He also found he liked outpatient medicine, because he doesn’t have “to be gone all the time. It’s better for the family. It fits my lifestyle,” he says. And it gives him ample time to garden, to keep bees and to spend time with his two children, his physician wife and both sets of grandparents who live nearby. His practice includes two other rheumatologists, and the retired doctor he replaced had been in practice for more than 25 years. The area is small enough that “everybody knows everybody,” he says. After years of moving around, it seems Dr. Smith has found the place to settle.

Have Passport, Will Travel

Rheumatologist Viviane M. Bunin, MD, PhD, assistant professor of clinical medicine at Houston Methodist Hospital, is a traveler. Her medical degree is from the University of Pernambuco in Brazil, and she earned her PhD at the University of Sao Paulo in collaboration with Necker Hospital in Paris. She completed a post-doc research fellowship at the Hospital for Special Surgery in New York and University of Washington in Seattle. She completed her American residency at Baystate Medical Center—Tufts University School of Medicine in Massachusetts. These days, she makes the commute to Bermuda for three to four days every four to six weeks to provide rheumatology care to patients on the island, seeing 10–12 patients a day. “I thought I’d see simple cases, like gout,” she says. “But where are the gout patients?” Instead she sees patients with overlapping diseases.

When rheumatology patients are very sick, they can go to Johns Hopkins, Boston or New York, but there is no follow-up when they come home. She says, “There is little or no continuity of care.” There are adult patients who went to Boston Children’s for pediatric treatment and now have no follow-up.

The general medicine and primary care practitioners are doing the best they can with their limited resources. For example, there is an oncology infusion center, but no infusion treatment for rheumatology patients. (An infusion nurse is scheduled to come to Bermuda to help set up a suite and train personnel.)

After the first couple of trips, she’d already seen 20 to 30 patients who were past due to begin biologics. “There is no reason not to be on biologics in 2016,” she says. The opportunity to set up clinical services and help bring other specialists, like the pulmonologist who’s started coming, to the island is rewarding. All the tools are starting to come together, according to Dr. Bunin: the infusion center, specialists and up-to-date drug treatment.

“It’s exhausting, but interesting. You can feel good about what you are doing. The patients are so grateful. When she hears comments like, “You’re saying I won’t have to live with pain like this for the rest of my life?” she tells them, “You’re going to love this.”

Ann-Marie Lindstrom is an independent writer and editor based in the Tucson, Ariz., area.