In 2019, the ACR created a Global Strategy Task Force to establish and oversee a cohesive approach to expanding its global impact in education, training and research through increased engagement with international partners.

Just as the task force met in February 2020, the world was plunged into the COVID-19 pandemic. The concept of global collaboration in medicine became more important than ever. Rheumatologists worldwide began reaching out to each other to share data, clinical knowledge and best practices, says Global Strategy Task Force co-chair, Evelyn Hsieh, MD, PhD, assistant professor of medicine, rheumatology, at Yale School of Medicine, New Haven, Conn.

“The current coronavirus pandemic has shown how important it is to work together. As rheumatologists, we have a unique patient population. The diseases we manage are rare, so having an inter­national network of experts to draw upon is a strength. This is a great opportunity for us to learn from one another,” Dr. Hsieh says. “The spirit of collaboration has always been an impetus behind the task force, and we have an opportunity to foster the ACR’s global programs and expand worldwide partnerships. These times illustrate how important this is and gives us new ideas for the future.”

At the task force’s February meeting, members reviewed and discussed their objectives and identified specific areas in which the ACR could expand and improve upon its existing global footprint and portfolio of activities, says co-chair Eric L. Matteson, MD, emeritus professor of medicine, Mayo Clinic Division of Rheumatology, Rochester, Minn. The task force is now engaged in developing ideas for specific initiatives and prioritizing them for consideration by the ACR Board of Directors and Executive Committee in August.

“We reviewed what the ACR is already doing internationally and discussed which activities are most important and how to prioritize them,” Dr. Matteson says. “Which areas should be pursued? The ACR is already an international organization. We have many international members, and members in the U.S. who have a strong international profile and impact. The ACR can play a role in bringing rheumatologists, rheumatology professionals, trainees and scientists together from around the world to better address clinical and scientific challenges within our field and improve the lives of people with rheumatic diseases.”

The task force’s goals include:

When national or regional rheumatology societies reach out to the ACR to collaborate on scientific meetings or educational activities, the task force may establish guidelines to ensure that global partnerships are in line with the ACR’s Strategic Plan. Examples of potential global partnership projects in medical education include expansion of digital content to reach learners worldwide and more engagement at live meetings, such as ACR Convergence (the new name for the ACR Annual Meeting) or other international meetings.

“We understand that medicine and rheumatology are international, now more than ever. We can learn from our colleagues and their patients around the world, and it’s a two-way street,” says Dr. Matteson. “This task force’s creation is really a recognition of the global nature of medicine today. We can incorporate these ideas into the ACR’s activities to promote our field on a global level. As a task force, we will develop recommendations for the ACR to consider in several areas: education, research, professional training and membership.” 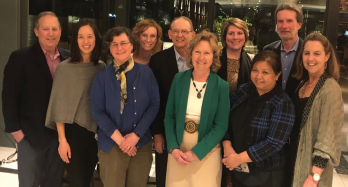 The ACR already plays an important role in supporting rheumatologists around the world, especially in regions with few rheuma­tologists and limited resources compared to the U.S., says Dr. Matteson.

“We could make our educational port­folio more accessible to providers and patients in underserved areas. We have a number of existing educational offerings, and we’re going to address how to consolidate them. ACR membership is also highly valued by rheumatologists worldwide, and the task force is reviewing more ways for them to become ACR members,” he says.

“We are also reviewing mechanisms to provide rheumatology training to more people that includes partnering with local associations and other rheumatology leagues. We will investigate how to best provide educational programming to rheumatologists and rheumatology professionals in different regions that are represented by other organizations,” Dr. Matteson adds.

For example, the ACR could foster more research collaborations and share research training expertise with societies in regions with few rheumatologists and scarce resources, he says.

The ACR is already a global leader in rheumatology. Our efforts should enhance that reputation, and that’s one of the factors driving this initiative.

“The ACR already has a global presence. But we believe the impact could be greater if these initiatives are better coordinated,” says Dr. Hsieh. “Efforts that are currently created in an ad hoc manner could be more sustained, and programs could build on and synergize with each other. Right now, there’s a great opportunity for clinical, training, research and education collaboration all over the world.”

Susan Bernstein is a freelance journalist based in Atlanta.