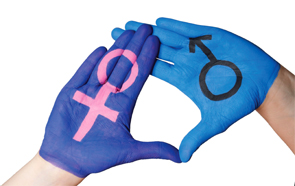 SAN FRANCISCO—Men and women have different mechanisms that are at work in producing pain in rheumatic diseases—a little-studied and little-appreciated fact that is crucial to developing and using the right kinds of treatments, an expert in rheumatic disease pain said in a talk at the 2015 ACR/ARHP Annual Meeting.

The lack of acknowledgment of this sexual dimorphism in pain is not surprising considering that pain in rheumatic diseases in general is an area that has not been examined closely enough, said Jon Levine, MD, PhD, professor of medicine in the Division of Rheumatology at the University of California San Francisco.

“We’ve made, in many ways, remarkably little progress,” he said. “I think we seriously have missed the boat in this particular area in the understanding of pain.”

Even though gender differences in pain mechanisms are less appreciated than they should be, it’s clear that women are more susceptible to certain rheumatic diseases than men: Systemic lupus erythematosus, systemic sclerosis, RA and others have a higher prevalence among women.

One factor in gender differences in pain and rheumatic diseases, Dr. Levine said, is the role that the extracellular matrix plays as an interface between the immune system and the nervous system. But a deep understanding of the mechanisms has been hindered by the approach to research: Almost all of the data that are available in understanding these mechanisms have come from animal and human studies involving exclusively male subjects, Dr. Levine said.

Because men and women both experience the same degree of magnitude of pain, and often for similar durations, the illusion exists that the mechanisms must be the same, he said.

But there are clear indications that important differences exist, he said.

How to Think about Pain

Dr. Levine said it makes sense to concentrate on the peripheral nervous system, both in looking at rheumatic disease pain and the gender differences of that pain. In particular, it’s important to recognize the relationship between what happens in the immune system and their peripheral mechanisms.

“Immune cells produce a large number of mediators that are able to act on a large number of receptors and able to produce sensitization to a number of different signaling pathways,” Dr. Levine said. That helps explain why pain can sometimes be so hard to treat, he said.

“It’s probably no wonder that individual signal blockers, individual mechanisms, have been relatively unsuccessful in terms of really maintaining chronic control of pain in patients where the disease over time may actually change in terms of its immune and biological function,” he said.