You are here: Home / Articles / 7 Tools to Identify Depression
Print-Friendly Version / Save PDF 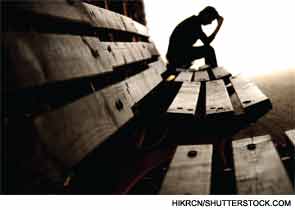 Depression is a serious brain-based condition affecting mood, participation in important life activities, quality of life and mortality. It can be considered a spectrum disorder, because many depressive symptoms may be present only occasionally or occur at a level that does not cause significant distress. It’s the persistence and intrusiveness of these symptoms that distinguishes depression from normal mood fluctuations. Despite effective interventions, only half of people with depression in the U.S. are accurately diagnosed, and of those, only 41% receive adequate care.1

Depression is caused by a complex interplay of biological, social/environmental and psycho­logical factors. Evidence demonstrates that people who are routinely exposed to high levels of stress, such as those with low socioeconomic status, exposed to violence and/or those who have chronic health conditions, experience increased levels of depression. The rates of depression for people with chronic health conditions is two to three times higher than the rate for the general population, and people who have three or more conditions will have seven times the rate of depression.2 In addition, chronic illnesses create physical and emotional stress, which exacerbates the symptoms of pre-existing depression.3,4 Depression causes feelings of sadness, emptiness and loss of interest in participating in life activities (i.e., anhedonia). Although some individuals with depression demonstrate apathy or lethargy, others may become irritable and angry. Depression also produces cognitive symptoms, such as inability to concentrate or focus and poor attention and memory. Studies have demonstrated depression also leads to declines in executive functions controlled by the prefrontal cortex.5

Depression is often present prior to the onset of chronic illnesses, including arthritis, cardiovascular disease and diabetes, and may trigger an existing vulnerability to those conditions. A 12-year prospective study followed 5,992 healthy individuals (mean age 58 at baseline) who were free of chronic illness and found that 5.2% of study participants had depression at baseline. Over the course of the study, 45% of participants developed arthritis, 19% had cardiac conditions, 13.9% developed diabetes, and 10.6% developed cancer.4 The impact of depression on all of these conditions except for cancer was statistically significant. Patients with osteoarthritis (OA) and rheumatoid arthritis (RA) have a very high prevalence of comorbid depression.3,6 It’s not surprising that chronic illnesses, including arthritis, appear to trigger the onset of depression by imposing pain, fatigue and activity limitations on affected individuals. Nosek reported that 51% of women with physical disabilities had mild depression and 31% were moderate to severely depressed.7 When mental illness coexists with other medical problems, it can affect the onset, progression and outcome of those disorders, increasing both morbidity and mortality.3 Having a psychiatric disorder with a physical condition can complicate the care of both conditions, causing the medical condition to be of longer duration and become more complicated and more difficult to treat. It also negatively affects a patient’s ability to adhere to medical regimens.8,9

The essential features of a major depressive episode must occur most of the day, every day, for at least two weeks. During that time, there is a depressed mood and/or the loss of interest and pleasure in most activities the person once enjoyed. While substantially impairing an individual’s ability to function at work or school and to cope with daily life stresses, depression should also be viewed as a life-threatening illness, because the risk of suicide is high.