You are here: Home / Articles / A Caring Hand from Across the Globe
Print-Friendly Version / Save PDF

When Daniel Fohrman, MD, took a six-month sabbatical from his rheumatology practice in Bend, Oregon, last year, he decided to spend a portion of that time at a third-world clinic offering medical care to the indigent. While searching for a clinic in an area that was of geographic interest, relatively politically safe, and that truly had a medical need, he found that an organization called Rokpa Canada (www.rokpa.ca) was planning a trip to provide medical care at a clinic in Yushu, Tibet. Dr. Fohrman applied and was accepted to the group. He shared some of his experiences in Tibet—and some of his photographs from the trip—with The Rheumatologist.

The clinic in Yushu, Tibet. 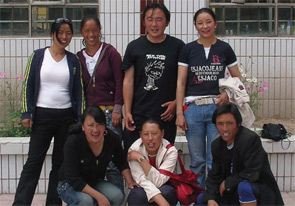 The group organizing the pharmaceutical supplies.

A Tibetan woman learning to use a portable toilet.

Ariel Bacharach and a Tibetan girl who received one of the walkers he built.

Dr. Fohrman considers his trips to the third world to provide medical care to the indigent a very personally rewarding experience. But what makes these trips even more fulfilling, in his opinion, is sharing them. He took his two sons with him on previous such trips to Nepal and Thailand. His recent trip to Tibet included his partner’s two children—16-year-old Dana and 18-year-old Ariel. Dr. Fohrman states, “Watching them make a place for themselves, adapt to a strange environment, and find a way to contribute to the effort was a truly fulfilling experience. Each of them has come away deeply affected and changed. They have taken a whole new perspective as citizens of the world, and this alone has made the trips worthwhile for me personally.”

The group included five doctors, a nurse, a physical therapist, an occupational therapist, a medical student from Scotland, a dentist, a professional cinematographer. Dr. Fohrman’s partner, Sheila Rittenberg, and her two children, Ariel and Dana Bacharach also joined the group.

The group was quartered in the school built by Rokpa for orphans and underprivileged children. The clinic is at the front of the school, and all medical care was provided out of that building.