You are here: Home / Articles / A Caring Hand from Across the Globe
Print-Friendly Version / Save PDF

When Daniel Fohrman, MD, took a six-month sabbatical from his rheumatology practice in Bend, Oregon, last year, he decided to spend a portion of that time at a third-world clinic offering medical care to the indigent. While searching for a clinic in an area that was of geographic interest, relatively politically safe, and that truly had a medical need, he found that an organization called Rokpa Canada (www.rokpa.ca) was planning a trip to provide medical care at a clinic in Yushu, Tibet. Dr. Fohrman applied and was accepted to the group. He shared some of his experiences in Tibet—and some of his photographs from the trip—with The Rheumatologist. 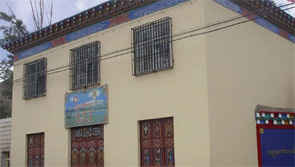 The clinic in Yushu, Tibet.

The group organizing the pharmaceutical supplies.

A Tibetan woman learning to use a portable toilet.

Ariel Bacharach and a Tibetan girl who received one of the walkers he built.

Dr. Fohrman considers his trips to the third world to provide medical care to the indigent a very personally rewarding experience. But what makes these trips even more fulfilling, in his opinion, is sharing them. He took his two sons with him on previous such trips to Nepal and Thailand. His recent trip to Tibet included his partner’s two children—16-year-old Dana and 18-year-old Ariel. Dr. Fohrman states, “Watching them make a place for themselves, adapt to a strange environment, and find a way to contribute to the effort was a truly fulfilling experience. Each of them has come away deeply affected and changed. They have taken a whole new perspective as citizens of the world, and this alone has made the trips worthwhile for me personally.”

The group included five doctors, a nurse, a physical therapist, an occupational therapist, a medical student from Scotland, a dentist, a professional cinematographer. Dr. Fohrman’s partner, Sheila Rittenberg, and her two children, Ariel and Dana Bacharach also joined the group.

The group was quartered in the school built by Rokpa for orphans and underprivileged children. The clinic is at the front of the school, and all medical care was provided out of that building.

Each physician had an interpreter. These young people were graduates of the Rokpa school where the group would be staying. Rokpa paid for them to be educated as physicians, but the Chinese will not let them practice.

The members of the group were required to bring whatever medications, materials, and equipment they would need to provide care upon arrival at the clinic. Dr. Fohrman and the others spent the two to three months prior to the trip gathering samples from pharmaceutical companies and putting together various types of equipment. Everything had to be repackaged and brought into Tibet in luggage, sleeping bags, and other travel bags.

Because they have only squat toilets in Yushu, people with severe knee or hip problems aren’t able to use the toilets available to them. The group bought every portable toilet they could find, and then they went from store to store sitting on buckets to determine which ones would support the weight of an adult and could be used as toilets.

There were not enough anti-inflammatories to provide a year’s supply to everyone, and there would be no follow-up care when the medical team went home. Dr. Fohrman had the foresight to take a large number of injectable steroids and needles with him, knowing he could provide at least several months’ relief to these individuals by injecting joints.

The clinic was able to service 60 to 75 people per day. Each day, anywhere from 100 to 300 people showed up at the gate asking for medical attention. The team implemented a “ticket” system—the staff would go out into the crowd an hour or so before the clinic opened and give tickets to individuals they thought would benefit most from the care they were able to provide. People became somewhat frantic, pushing at the gate and trying to enter through the back door. Dr. Fohrman states, “It was extremely stressful having to turn people away who so obviously needed our help.”

Dr. Fohrman went to Tibet with the intent that he would practice primarily internal medicine there, but he spent the majority of his time seeing people with arthritis. The Tibetan people live a nomadic and agrarian lifestyle. They don’t have cars or buses and when painful arthritis renders an individual incapable of walking or climbing hills, it seriously hinders his or her lifestyle.

Eighteen-year-old Ariel spent a great deal of time working with the group’s occupational therapist fashioning a walker out of shovel handles and wheels from old walkers. During its visit, the group was able to build walkers for two children who had previously been unable to get around on their own.

Dr. Fohrman has been asked to consider setting up a similar clinic in Vietnam. He asks that anyone who may have interest in such a project contact him at: [email protected].

Sheri Polley is a freelance writer based in Pennsylvania.