The ACR’s Affiliate Society Council (ASC) membership has grown from 34 states to 40 since 2015. The growth of the Council is mainly attributed to newly formed state societies, as well as existing state societies focusing on orienting themselves for advocacy on behalf of rheumatologists and their patients.

Increased participation by state societies helps support the mission of the ASC, which is to create a forum for the leadership of rheumatology state societies to discuss best practices in health policy and insurance issues affecting their practices and patients. The ASC is chaired by a rheumatologist who works with state society presidents from all over the country. The current ASC chair is Howard Blumstein, MD, a practicing rheumatologist in Smithtown, N.Y.

ASC Contributes to the ACR

The ASC has also allowed the ACR to better serve its members by acting as a communication network for other departments of the College. The Council was able to support the ACR’s Collaborative Initiatives in securing a grant from the Centers for Disease Control and Prevention (CDC) for a project to develop an education action plan on minority and/or disadvantaged populations’ participation in clinical trials for lupus. The ASC submitted a letter stating that the Council’s network has the ability to disseminate lupus awareness and educational materials across the country to provide lupus education to physicians whose patients may not have access to a rheumatologist.

The ASC also helped the ACR educate members by helping facilitate the hugely successful MACRA Roadshow, a program prepared by the ACR and presented by rheumatologists and ACR staff at state society meetings across the country. In 2016, the MACRA Roadshow visited more than 25 states and Puerto Rico, preparing ACR members for the implementation of the upcoming MACRA law. State society presidents were very eager to have the MACRA Roadshow presented to their members, and because of the demand and success, the program will continue in 2017. 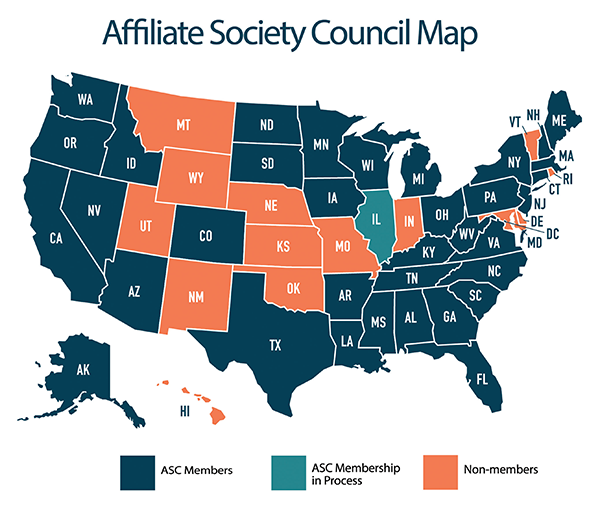 The ASC also helps give a voice for rheumatology state societies in Washington, D.C. Several times this year, the ASC has empowered state rheumatology leaders to express their voices at the federal level on multiple issues, including average sales pricing, dual-energy X-ray absorptiometry performed as a hospital outpatient service in the 2017 Hospital Outpatient Prospective Payment System and the Part B Demonstration Project. This is accomplished by allowing states the opportunity to sign their names to letters to Congress along with other national organizations in the form of official comments.