Pendaar Pooyan was diagnosed with juvenile idiopathic arthritis (JIA) in elementary school. He learned to ask for what he needed: use of a computer in class because of wrist pain and a locker that didn’t require him to bend down so far. And he learned to talk about his disease. This helped make participating for the first time in the ACR’s Advocates for Arthritis fly-in last year a natural fit for the teen, now a high school junior.

Penter Pooyan, a high school junior with JIA, and one of the attendees at the Advocates for Arthritis event.

Mr. Pooyan will join roughly 100 other rheumatology patients, providers and administrators from around the country in Washington, D.C., Sept. 23–25, 2018, for the annual fall event, which brings them together with their legislators and their staff to advocate on behalf of rheumatology.

“I have never shied away from telling teachers, students and administrators that I have JIA, and I have never stigmatized it,” says Mr. Pooyan. “I tackle it head on, and I think that’s one thing that has helped me in advocating for kids with JIA.”

Event Background & Key Issues
Each year, the three-day event begins in conjunction with the ACR’s Advocacy 101 course, an immersive crash course in effective healthcare advocacy for ACR and ARHP members. Participants are briefed on the specific issues at the heart of the ACR’s efforts, and two days are dedicated to small group meetings with lawmakers from attendees’ home regions.

“The primary goal is to keep our membership and patients energized and focused on the importance of advocacy because, without that, we can’t accomplish anything,” says Will Harvey, MD, MSc, FACR, ACR Board member and rheumatologist at Tufts Medical Center, Boston.

Participants will be brought up to speed on four issues this fall. The first, step therapy, limits patient access to appropriate treatments by requiring a treatment to fail for them before they can try another. The ACR supports the bipartisan Restoring the Patient’s Voice Act (H.R. 2077) to ensure a process for granting privately insured patients exemptions. 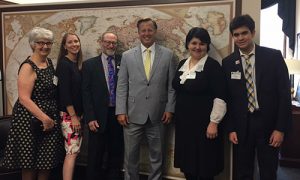 When she was a practicing rheumatologist, step therapy was a profound issue for patients of Bita Shakoory, MD. Dr. Shakoory, Mr. Pooyan’s mother, says some rheumatoid arthritis (RA) patients have been denied coverage for methotrexate until other treatments failed to work for them, such as gold salts and penicillamine.

“These were used 30 years ago, and we are talking about 21st century United States, not an underdeveloped country with no access to medication. They have high toxicity and limited benefits for patients with RA,” she says. “At some point, they were all we had, but today methotrexate is a first-line medication used for rheumatoid arthritis.”

Dr. Shakoory was diagnosed with ankylosing spondylitis during her rheumatology fellowship and attends the fly-in because her experiences have given her first-hand knowledge of the challenges and barriers to providing and receiving care.

This year’s agenda also includes asking for dedicated, line-item research funding for RA from the Department of Defense. “It is the second leading cause of medical discharge from the military after battlefield trauma,” says Dr. Harvey.

Participants will also push for improved patient access to dual-energy X-ray absorptiometry (DXA), a bone density test. Medicare reimbursement for DXA has dropped 70% since 2007. This no longer covers the provider cost to administer the test and forces patients to seek scans at hospitals.

Further, attendees will discuss with legislators the unintended consequences of a billing change designed to reduce administrative burden. It calls for consolidating all evaluation and management services into a single billing code.

Patient Input & Impact
At the event, longtime attendee Michael Taffe says personal stories matter, and everyone has a different role to play. Mr. Taffe is a rheumatology patient with a passion for helping others.

“I have learned that patients have a different impact on the members [of Congress] than the doctors do,” he says. “Once we understand the agenda of the doctors, … it’s my job to put a real face on what the doctors are talking about and asking for.”

For Nancy Ellis, MBA/MHA, an ARHP member and practice administrator at Piedmont Arthritis Clinic, Greenville, S.C., attending the fly-in in the past has helped her foster relationships with her representatives. “You’ve got a name when something is going down, instead of just sending something to an amorphous email box,” she says.

Attending for the first time can be nerve-wracking, but Mr. Taffe reminds people to be themselves. This is what Sydney Lau hopes to do this year, when she attends for the second time. The high school senior from California says she was really nervous last year, but is setting aside college applications to once again share her personal experience in living with JIA at the national level.

“I want to be informed about healthcare so I can make good decisions for myself,” she says. “It’s fun to learn and be able to tell other people about it.”

Pitch In & Have Patience
The results of advocacy may not always manifest immediately, says Dr. Harvey, but “if we keep the message up over time, we can have an impact.”

This is what continues to motivate Dr. Shakoory. “There is a huge need for advocacy, no matter which way you look at it, and we are approaching the lawmakers to try to change things for rheumatology patients. I think we all need to pitch in—every single one of us—in whatever capacity we can.”