You are here: Home / Articles / An Update from the RheumPAC Chair on the 117th Congress
Print-Friendly Version / Save PDF

With the August recess over and only a couple months left in the legislative calendar for the 117th Congress, ACR staff and the Government Affairs Committee have continued to advocate and engage with members of Congress, while RheumPAC has been working to ensure that individual legislators understand what you, your practice, your patients and others in the rheumatology community face when it comes to delivering high quality care to those with rheumatic diseases. 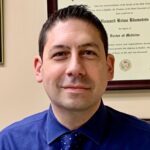 As the only federal political action committee (PAC) dedicated solely to the interests of rheumatology, RheumPAC will continue to educate members of Congress and is always in need of additional resources to compete with those who have conflicting interests. Read on to learn about all the important work that has been done, and consider donating at www.rheumpac.org to help ACR advocacy efforts.

Congress has recently pivoted to considering a series of large packages consisting of multiple policies rather than its traditional bill-by-bill legislative process. The ACR and RheumPAC have taken part in those discussions to push for policy beneficial to rheumatology while pushing back on proposals that would hinder our ability to deliver care. Key provisions in some of the big bills you may have heard about in the news have:

**The ACR continues to work with Congress and will work with regulatory agencies to ensure physicians, practices and patients are not in the middle of negotiations between the government and drug manufacturers that will hurt access to Part B medications. The ACR is also proposing exempting Part B reimbursements from sequestration reductions.

In addition to those larger packages, we have been working fervently behind the scenes on other key provisions of the ACR’s policy priorities. These efforts have:

The ACR and RheumPAC have also been educating members of Congress and building bipartisan support for several other proposals, including: