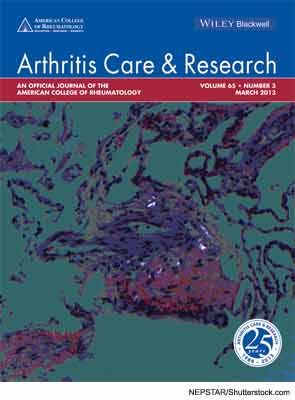 Growing a journal, says Marian T. Hannan, DSc, MPH, current editor of Arthritis Care & Research (AC&R), is comparable to bringing fresh water to a village: “Twenty-five years ago, we installed our tap and got fresh water from the spring for the first time,” she says of AC&R’s origins. “Now we not only have fresh tap water for many people, we’re incorporated into the town and the city. We’ve got water running all over the place, and it’s nourishing current and future occupants—everyone who consumes the information that’s in the journal.”

The metaphor serves to illustrate the journal’s current reach and stature in the domain of clinical and epidemiological research, says Dr. Hannan, who is a senior scientist at the Institute for Aging Research at Hebrew SeniorLife and also an associate professor at Harvard Medical School in Boston.

The journal’s 25-year history features many milestones (See timeline). From its beginnings in 1988 as a stand-alone quarterly journal of the Arthritis Health Professions Association (the precursor to the ARHP and part of the Arthritis Foundation when AC&R launched), to its bimonthly and then monthly publication as a section of Arthritis & Rheumatism (A&R), to its separation in 2010 as a stand-alone monthly journal, AC&R has evolved and thrived due to the steadfast support of its editors, the ACR, and the ACR Committee on Journal Publications (CJP).

In its first years, the journal’s editors were challenged to secure original research papers for the quarterly publication. Graciela S. Alarcón, MD, MPH, emeritus professor of medicine at the University of Alabama at Birmingham School of Medicine, served as the journal’s second editor from 1990–1994 and recalls attending meetings of the former National Institutes of Health–funded Multipurpose Arthritis Centers to encourage submissions to AC&R. “But we were competing with journals that were already in the Index Medicus and had a nice impact factor; our journal was still unproven,” she says. During her editorship, Dr. Alarcón initiated thematic sections and issues with guest editors who invited papers from experts in each specific theme, an innovation that was well received and continues today.

The editorial board’s tent expanded—to include a wider array of specialties and international members—when Leigh F. Callahan, PhD, professor of medicine at the Thurston Arthritis Research Center at the University of North Carolina at Chapel Hill, became editor in 1995. Dr. Callahan served as an associate editor under the publication’s first editor, Donna J. Hawley, MSN, EdD, director of institutional research at Wichita State University in Wichita, Kan. The journal increased its page count and began bimonthly publication during Dr. Callahan’s tenure as editor. Even so, she says, “When I took over as editor, we were still trying to get people to send their best work to us.” She credits then-editor of A&R, William P. Arend, MD, professor of medicine in the division of rheumatology at the University of Colorado in Denver, with helping to grow the journal by encouraging submissions from colleagues.

By most accounts, the journal really began to take off in 2001 after the CJP made the decision, in 2000, to merge the two journals. Publishing AC&R bimonthly as a section of A&R led to PubMed indexing. “That was the tipping point,” says Dr. Alarcón.

Although the move was positive, it contained some controversy. For A&R, the move was a calculated risk, since including the sister journal under its wing could have an effect on its impact factor. David S. Pisetsky, MD, PhD, professor of medicine and immunology at the Duke University Medical Center in Durham, N.C., and chief of rheumatology at the Durham VA Medical Center, who was editor of A&R from 2000–2005, says, “I think everybody knew that when we combined the journals, the impact factor of A&R would go down somewhat. We thought, on balance, that that was a wise decision—and I still agree—and that it would not affect the standing of A&R.”

In addition, say Drs. Alarcón and Callahan, ARHP members were concerned that the shift to a more clinical focus meant rheumatology health professionals would not have a journal solely dedicated to their domain. But indeed, says Dr. Callahan, the compromise allowed the journal to survive. “Overall, rheumatologists and professionals working in the field have gained” from the changes, agrees Dr. Alarcón.

Gene G. Hunder, MD, professor emeritus in the department of internal medicine/rheumatology at the Mayo Clinic, Rochester, Minn., steered AC&R through the first years of the merged publications. “My charge was to secure more clinically related articles that were starting to go to other journals,” he recalls. “I thought it was an interesting challenge.” It was a growth period, and Dr. Hunder did a fair amount of soliciting submissions from presenters at ACR meetings. “By the time I finished [he served as editor from 2000–2005] we had quite a few more articles submitted, and our rejection rate had increased from an original 20% to around 60%,” a reflection of the increasing quality of submissions. Dr. Hunder also initiated “Pro and Con,” “Updates,” and “Trainee Rounds,” three new article types to stimulate readership. “It was a lot of fun,” he says. “And I think we saved it from being deleted as a journal. Now it has established itself very nicely.”

Leslie Crofford, MD, professor of medicine at Vanderbilt University in Nashville, Tenn., chaired the CJP from 2003–2005. As Dr. Hunder’s term as editor drew to a close, the committee was charged with appointing his successor. “We wanted to find the right editors for the journal,” recalls Dr. Crofford. “At the end of the day, we felt that the research credentials that Drs. Katz and Yelin brought to the journal, with a focus on outcomes, epidemiology, and health services research, meant that they would be the right editors for that period of time.”

Patricia P. Katz, PhD, and Edward H. Yelin, PhD, both professors of medicine (rheumatology) and health policy at the University of California, San Francisco School of Medicine, took the journal to a whole new level, according to those involved with the CJP. Dr. Yelin remarks, “The journal has had a history of really great editors. These were energetic people who faced greater challenges than we did. They set the stage so that when there was a confluence of the shared impact factor, the growth of clinical research, and internationalization of research, that allowed things to take off.”

Dr. Katz agrees with her colleague: “We were fortunate to come along at the right time and to be able to stand on those historical shoulders.” During their tenure, Drs. Katz and Yelin took advantage of their extensive professional network within the ACR and ARHP and introduced special-themed issues, providing a single forum for exploring multidisciplinary work on specific issues affecting people with rheumatic conditions. During Drs. Katz and Yelin’s editorship, AC&R, along with A&R, instituted several new policies, including registration of clinical trials, international institutional review board approval of studies with human subjects, and guidelines regarding authorship; added the “Policy Matters” and “Clinical Aspects of Molecular Research in Rheumatology” features; and guided the journal through the e-publication-ahead-of-print-issue gauntlet.

Antony Rosen, MD, director of the division of rheumatology and professor of medicine, cell biology, and pathology at The Johns Hopkins University in Baltimore, served as chair of the CJP during the time that Drs. Katz and Yelin became co-editors. Inclusion of the journal with A&R had instantaneously and dramatically improved its impact factor. “That was the turnaround phase,” he recalls.

During the copublication period and since the separation of the two journals, collegiality has dominated the relationship between the two journals’ editors. Drs. Pisetsky and Hunder often alerted each other to submitted papers that would fit under the umbrella of the other journal’s content focus. Still, notes Dr. Rosen, “there has always been some tension about defining the scope of the two journals. There may be some papers that A&R believes belong in their journal and not in AC&R, and vice versa. But such is life, and a little competition is a healthy thing.” Dr. Pisetsky agrees, and believes that the ACR’s tent is big enough for both sister journals. “I think AC&R represents a very important area of scholarship. I’m delighted that it has a clear identity. And, although there may be overlap between the two journals, having AC&R allows A&R an even stronger involvement with more basic and translational research, since the combined journal represented a big increase in pages with ‘high impact’ and encouraged more submissions.”

A stand-alone monthly publication since 2010, with a respectable impact factor of 4.85, AC&R now joins A&R as a leading go-to journal for clinical rheumatology research, attracting submissions from top clinical and epidemiology researchers from all over the world. Dr. Hannan reports that the volume of manuscript submissions has risen in the two years she’s been editor, from 50 a month to 100 a month.

“I think the American College of Rheumatology sister journals are outstanding in quality, and that together they provide a service that is indispensable to the field,” says Dr. Rosen. “I think as long as rheumatology is strong and generating important scholarship, those journals will thrive.”

Gretchen Henkel is a medical journalist based in California.

AC&R launched in March as a quarterly journal with Dr. Hawley as editor. It is the official journal of the Arthritis Health Professions Association.

AC&R begins being published as a journal of the ARHP.

Dr. Hunder becomes editor. Journal is published online as well as in print in February.

AC&R becomes a section of A&R, and an official journal of the ACR and ARHP.

AC&R separates from A&R to become a standalone journal.