Figure 1: Computed Tomography of the Abdomen

Our patient was a 33-year-old, 5’2″ Asian woman with a past medical history of systemic lupus erythematosus (SLE). The diagnosis was based on serologies positive for anti-nuclear antibodies (ANAs), as well as antibodies to Sm, RNP and SSA. Her illness included neuropsychiatric and cutaneous involvement. She also had a diagnosis of Hashimoto’s thyroiditis.

She presented with two weeks of abdominal bloating and one week of abdominal pain, nausea, vomiting and non-bloody diarrhea. Her symptoms began two weeks before, with abdominal fullness and bloating, which progressed to acute-onset, diffuse, intermittent, cramping abdominal pain associated with non-bloody emesis and multiple episodes of non-bloody, watery diarrhea. She had not been able to tolerate oral intake for the past few days. She denied fevers, chills, sick contacts or recent travel, but said a sweet potato casserole she ate may have been “bad.”

One week prior to admission, she was seen in student health and was given intravenous fluids and antiemetics. A few days prior to admission, she presented to the emergency department for persistent symptoms. An abdominal ultrasound done in the emergency department was unremarkable, a pregnancy test was negative, and enteric stool pathogen testing was negative. She improved after receiving intravenous fluids and antiemetics and was again sent home.

The patient felt better for one or two days and was able to eat and drink, but then her symptoms returned—this time with more severe abdominal pain and bloating—and she returned to the emergency department.

On further questioning, she reported a similar episode occurred about 11 months before. That episode lasted for a few days and resolved after she was administered intravenous fluids at student health. 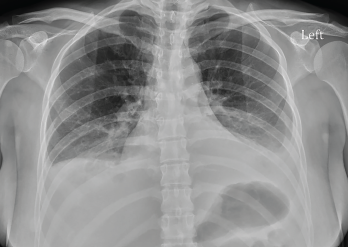 Figure 2: Radiograph of the Chest

Our patient was first diagnosed with SLE in 2014. She had acute cutaneous lupus, with biopsy-proven interface dermatitis (i.e., a pattern of skin reaction characterized by an inflammatory infiltrate that appears to obscure the dermo-epidermal junction when observed at low-power examination and referred to as lichenoid tissue reaction) and was initiated on 200 mg of hydroxychloroquine twice a day.

In 2015, she developed neuropsychiatric symptoms—seizures with an elevated immunoglobulin G (IgG) index on her cerebrospinal fluid analysis—as well as oral ulcers and alopecia. Serologies at that time were remarkable for an ANA of 1:1280 in a speckled pattern, anti-Sm, anti-RNP and anti-SSA antibodies, low complements and leukopenia.

She was treated with 1,000 mg of intravenous methylprednisolone daily for three days. Her treatment also included 1,500 mg of mycophenolate mofetil twice a day, 200 mg of hydroxychloroquine twice a day and a slow taper of prednisone.

She self-discontinued all of her medications toward the later part of 2015 due to what she described as medication side effects and a concern for toxicity.