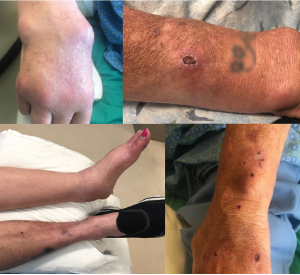 A 61-year-old Caucasian woman with a history of seropositive rheumatoid arthritis (RA) was hospitalized for a several-month history of progressively worsening left ankle pain and swelling.

She had been unable to bear weight on her left leg for several days and did not notice improvement in symptoms with 20 mg of prednisone daily, which she had increased to 40 mg daily a few days prior to admission. Her right wrist and hand were also painful and swollen. Over the preceding months, she had noted progressively enlarging, painful nodules on her right forearm, one of which had spontaneously drained yellow-tinged fluid. She had also developed ulcerations over some of the nodules and the contralateral forearm. She did not have any preceding trauma to the right upper extremity. A review of systems was notable for several months of intermittent night sweats.

She had several pug dogs at home; one had recently died, and both had been experiencing rashes and skin issues. She reported no other pets, nor any unusual personal or occupational exposures.

The patient had been diagnosed with seropositive RA at age 55 and had been previously treated with multiple biologic and conventional synthetic disease-modifying anti-rheumatic drugs (DMARDs), most recently with good therapeutic response to rituximab.

Unfortunately, she had lost her private insurance coverage, resulting in poor access to care and being off all biologics for a year at the time of her presentation. However, she reported taking 20 mg of prednisone daily for the preceding four or five months.

Other pertinent medical history included a previous left ankle infection, which, per the patient, had been treated successfully with surgical washout and intravenous antibiotics the prior year.

After an initial work-up for an infectious etiology proved negative, a rheumatologist was consulted for treatment recom­mendations for a presumptive inflammatory arthritis flare with concern for rheumatoid nodules or, possibly, ganglion cysts involving the right upper extremity.

Further history and review of outside records confirmed the history of poly­microbial left ankle septic arthritis, with cultures at the time yielding coagulase-negative Staphylococcus, Corynebacterium and Sporothrix schenckii. Outside records indicated she had completed her recommended course of antibiotics for the bacterial infections; however, her insurance had lapsed prior to completion of the recommended six-month course of antifungal treatment.

On exam, the patient was Cushingoid and chronically ill appearing, with normal vital signs. Her musculoskeletal exam was notable for synovitis in her right second through fifth metacarpophalangeal joints, as well as in her right wrist, right elbow and left ankle (see Figure 1). Her left ankle was warm and tender, with pain on both active and passive range of motion. She was also noted to have several tender, fluctuant, cystic lesions on the right forearm, as well as shallow ulcerations on both upper arms (see Figure 1).

Pertinent lab results at the time of admission included a peripheral leuko­cytosis of 16.4% (109/L), with 92% neutrophils, erythrocyte sedimentation rate of 25 mm/hr and C-reactive protein of 46.4 mg/L. Arthrocentesis of the left ankle yielded 11,550 nucleated cells (differential not performed) and 25,300 red cells, with a negative gram stain and crystal analysis.

Disseminated sporotrichosis was suspected due to the pattern of destruction in her ankle, as well as the appearance of cutaneous cystic lesions. An MRI of the right forearm was obtained, which demonstrated multiple mildly complex subcutaneous and soft tissue fluid collections, as well as dorsal compartment tenosynovitis (see Figure 3).

The rheumatology team recommended consultation with an orthopedist, who reviewed the imaging and felt the findings were more likely related to sequelae of advanced rheumatoid arthritis than to an atypical infection.

Given the concern for possible disseminated fungal infection and the uncertain etiology of the fluid collections in the wrist, we elected to aspirate the cysts, yielding approximately 10 cc of gelatinous fluid (see Figure 4). The fluid was too viscous for a cell count and differential to be conducted; however, cultures from both the cyst aspirate and the left ankle effusion ultimately grew Sporothrix (see Figure 5).

The patient was started on intravenous amphotericin, as well as oral itraconazole, and underwent incision and drainage of her left ankle and her right forearm lesions. She required multiple surgeries to address chronic left ankle fungal osteomyelitis, with necrosis involving the tibia, fibula and talus.

The infectious disease team recommended ongoing antifungal therapy with itraconazole, with plans for at least one year of treatment after her most recent surgery.

Cognitive biases are known to contribute to medical errors and diagnostic delays, and the care of patients with rheumatologic conditions arguably presents an inherently higher risk for these types of errors.1–3 Distinguishing between fungal infections and autoimmune disease can be challenging and requires both careful evaluation and a high degree of suspicion, particularly related to opportunistic infections.

Given that rheumatologic conditions and indolent fungal infections are relatively uncommon, providers may be unfamiliar with possible disease presentations causing a tendency toward search satisfying, in which consideration of alternatives stops once a plausible explanation is found. Wide variation exists in the estimation of infectious risk associated with commonly used rheumatologic therapies, potentially contributing to biased assessment.4

In this case, premature diagnostic closure and confirmation bias likely led the providers to prematurely lock on the known rheumatologic condition and give undue credence to findings that confirmed this diagnosis, excluding data that argued against RA as the sole cause of her illness.5

Numerous reports in the literature involve patients who were misdiagnosed with RA, gout or psoriatic arthritis and were only identified as having disseminated sporotrichosis after multiple treatment failures with systemic immunosuppression.6–9

The presentation of Sporothrix arthritis is often variable, with reports of monoarticular, oligoarticular and even polyarticular disease being common. Although skin findings are often present, they are frequently attributable to the suspected underlying disease process.6

There are also reports of misdiagnosis of Sporothrix arthritis with vasculitis, sarcoidosis and pyoderma gangrenosum, with confusion often owing to the presence of mixed granulomatous and suppurative inflammation on histology, often with no apparent fungal elements.10–14 In the majority of these cases, diagnosis was delayed by months despite attempts at biopsy or arthrocentesis, which initially failed to demonstrate the causative organism. The diagnosis was often made when cultures were repeated after patients failed to improve on systemic immunosuppression, likely due to increases in organism burden resulting in improved sensitivity of cultures and histologic examination.10–12

The development of large, painful nodules on exam was also suggestive of a diagnosis other than rheumatoid arthritis. As noted in our exam, these lesions were fluctuant to palpation and quite tender, suggestive of a fluid collection, such as a cyst or abscess. This contrasts with the typically firm, rubbery character of rheumatoid nodules.

Mycotic cysts or pseudocysts may also be mistaken for benign conditions, such as synovial cysts or epidermal inclusion cysts; however, these conditions are usually not associated with worsening inflammatory arthritis and are not typically painful.14

It is also worth emphasizing that although the classic description of sporotrichosis is of lymphocutaneous spread following direct inoculation by contaminated plant matter, other cutaneous and systemic findings can be seen, particularly in immunocompromised patients.15 Cutaneous infection may manifest as nodular or noduloulcerative lesions, ulcers, cysts, pseudocysts or verrucous papular lesions.16

Our patient lacked an obvious history of gardening or rose exposure that would suggest the possibility of sporotrichosis, and yet this should not have excluded the possibility of infection, because a specific exposure is not identified in many cases.

Inoculation with Sporothrix species is classically tied to exposure to plant matter; however, there are also reports of animal-associated disease. In particular, feline-transmitted Sporothrix brasiliensis has been responsible for an epidemic of infections in Brazil.15,17 In osteoarticular infections, the organism may be directly introduced into a joint; however, it may also spread contiguously (as in from skin to joint) or by hematogenous route, in the case of pulmonary inoculation.15,17

Overall, this heterogeneity in possible mechanisms of inoculation creates a diagnostic challenge and illustrates the need for broad differential considerations in immunocompromised patients.

Arguably the most important clue for an infectious process in both our case and for many reported cases in the literature was a failure to respond to what should have been adequate immunosuppression for the treated condition. Although not an ideal long-term therapy, 20 mg of prednisone daily should have provided reasonable control for our patient’s RA.18,19 Her chronic prednisone use at a dose of 20 mg was also an important risk factor for serious infection, particularly with an opportunistic organism.20–23

Disseminated sporotrichosis appears to be more common in patients with compromised cellular immunity. This includes patients on immunosuppressive regimens, but also individuals with HIV/AIDS, diabetes or alcoholism.15

The treatment is generally a combination of amphotericin B and itraconazole, narrowing to itraconazole monotherapy after initial clinical improvement.15–17 The duration of treatment depends on the severity of infection and host immune factors, with long-term (six months to a year) therapy often necessary in immunocompromised patients.15–17 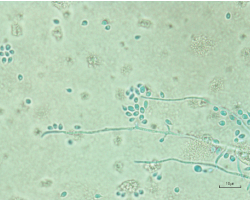 As rheumatologists, our role is not only to diagnose and treat rheumatologic disease, but also to consider alternate explanations and to advocate for thorough and appropriate work-up to reasonably exclude infectious etiologies.

Reducing the impact of cognitive bias in the care of our patients will likely necessitate increasing the available rheumatology workforce, and rheumatology educational opportunities during medical training and for our colleagues in practice.

Sarah Dill, MD, was a third-year rheumatology fellow at the University of Colorado, Aurora, when this article was written. She is now working at the Rocky Mountain Regional VAMC in Aurora, Colo.

Duane Pearson, MD, is an associate professor in the Department of Internal Medicine-Rheumatology at the University of Colorado.