Dermatomyositis (DM) is an idiopathic inflammatory myopathy involving proximal muscle weakness and skin rash. An associated increased risk of malignancy is well established.1 The most frequent malignancies are related to the ovary, endometrium, lung, gastrointestinal tract, prostate, breast and lymphatics.2 On rare occasions, DM has been reported with certain types of non-Hodgkin’s lymphoma, specifically cutaneous T cell lymphomas, such as mycosis fungoides, primary cutaneous aggressive epidermotropic CD8+ T cell lymphoma, NK/T cell lymphoma, angiotropic lymphoma and cutaneous γδ T cell lymphoma.3,4 The risk of non-Hodgkin’s lymphoma is increased within first year of a DM diagnosis; the risk of other cancers is increased for up to five years following diagnosis.2

A 57-year-old white man presented with diffuse, ulcerated skin lesions. These lesions first developed two years before on his trunk, then spread to his extremities and oral mucosa. A previous muscle biopsy, performed due to weakness, showed evidence of DM, and a skin biopsy revealed interface dermatitis. Anti-PL-12, anti-signal recognition particle (SRP) and anti-Mi-2 antibodies were all present.

He had been noncompliant with prescribed disease-modifying anti-rheumatic drugs (DMARDs) and steroids.

The patient was treated with intravenous immunoglobulin, pulse steroids, hydroxychloroquine and mycophenolate. His skin lesions initially improved somewhat with treatment, only to worsen within three weeks. He was refractory to a second round of intravenous immunoglobulin. One month later, the patient developed multiple cutaneous tumors with a 12 lb. weight loss. A lesion biopsy confirmed mycosis fungoides (see Figures 1C–D). Despite radiation and chemotherapy, the patient died. 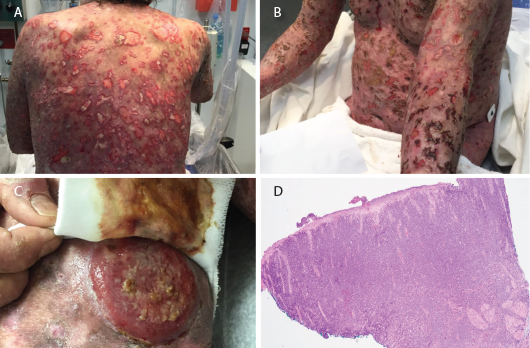 The association between malignancy and idiopathic inflammatory myopathy has long been reported. Overall, the malignancy risk in patients with myositis has been found to be 4.5-fold higher than in patients without idiopathic inflammatory myopathy. The relative risk of overall malignancy is 5.5 for DM and 1.62 for polymyositis. The relative risk was also significantly higher within the first year of diagnosis and higher in men.5

An analysis of the frequency and risk of specific cancers in idiopathic inflammatory myopathy found that of 618 DM patients, only three of 115 malignancies were non-Hodgkin’s lymphoma. Although the number of cases was low, the standardized incidence ratios were high. Ovarian and lung cancer had the highest standardized incidence ratios when compared with non-Hodgkin’s lymphoma.2

In our literature review of DM, we found only six cases of cutaneous T cell lymphoma, with only one patient having mycosis fungoides. Despite its rarity, cutaneous T cell lymphoma should be considered in DM patients presenting with such skin findings as atypical plaques, nodules, ulcerations and tumor formation.3 Some of these findings were noted in our patient (see Figures 1A–D).

Because cutaneous T cell lymphoma lesions mimic those of other diseases and can be mistaken for atypical DM rash, diagnosis can be delayed. Sequential biopsies may be necessary to clinch the diagnosis and initiate proper treatment, as required in our patient (see Table 1).