Systemic lupus erythematosus (SLE) is an autoimmune-mediated rheumatic disease characterized by multisystem involvement that can cause significant morbidity and mortality. Acute disseminated encephalomyelitis (ADEM) is a rare, fulminant, autoimmune-mediated, demyelinating disease involving the white matter of the central nervous system (CNS), and is considered a manifestation of neuropsychiatric lupus.

Few reported cases involve SLE and ADEM occurring simultaneously. Some of these cases were preceded by an infection, but others had no identifiable cause. One 2015 study suggests SLE can present as ADEM, because both occur due to abnormal immune regulation.1 ADEM with lupus rarely appears in the literature, and ADEM as the initial presentation is even rarer.

We present one such case below.

A 21-year-old African American male appeared in an emergency department with pain in his left calf, initially thought to be cellulitis. A few days after his initial evaluation, he was diagnosed with deep vein thrombosis (DVT), which was treated with apixaban.

One week later, he again required medical attention, and this time he was admitted for a 104ºF fever, chest pain and shortness of breath. A computerized tomography (CT) pulmonary angiogram performed to look for possible pulmonary embolism revealed a large pleural effusion and possible pneumonia. The patient was treated with broad-spectrum antibiotics and anticoagulation medications, and discharged home when clinically stable.

Only one day after his discharge from the hospital—roughly three weeks after his initial emergency department visit—the patient developed a severe headache over the temporal area and shortly after became minimally responsive with left-side paresis. The physical exam in the emergency department noted confusion, difficulty following commands, subconjunctival and periorbital edema, and left-side paresis.

His family history was positive for possible rheumatoid arthritis and discoid lupus in the patient’s maternal grandmother. 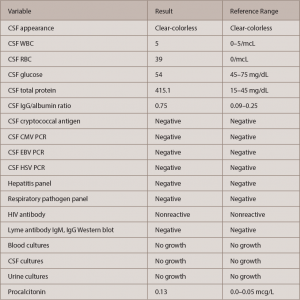