You are here: Home / Articles / Childhood-onset Lupus Brings Distinct Challenges at Each Phase of Life
Print-Friendly Version / Save PDF

Among the larger published cSLE cohorts, the average age of diagnosis is 12.5 years, so cSLE is not only a disease that affects adolescents, as many children present in the first decade of life. Recent literature reviews and a meta-analysis have examined the clinical similarities and differences between cSLE and aSLE.6-8 All agree that malar rash, lymphadenopathy, cytopenias, and nephritis have a greater prevalence in cSLE. Figure 1 illustrates the decreasing incidence of renal disease with increasing age of SLE diagnosis.

Neuropsychiatric SLE (NPSLE), as defined by the 1999 ACR case definitions, is less clear. A recent study of our Toronto-based cSLE cohort found that 12% of 447 patients developed psychosis and/or significant cognitive dysfunction, and one-third of these patients reported suicidal ideation.9 Other recent studies suggest that psychosis is likely more prevalent, if not at least as prevalent in cSLE as it is in aSLE. The occurrence of seizures is less clear, as their attribution may be multifactorial: NPSLE, a complication of nephritis and significant hypertension, an adverse event from a drug, or complication of the macrophage activation syndrome. Headaches are frequent in cSLE, and the prevalence probably does not differ from aSLE.

With an understanding of cSLE manifestations, the following is a typical case that highlights some common management issues. 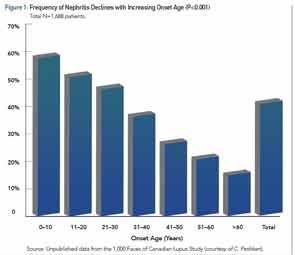 A 14-year-old, African-Canadian female presents with malar rash, alopecia, polyarthritis, hypertension, nephrotic-range proteinuria, peripheral edema, and a moderate-sized pericardial effusion. At presentation, laboratory values are notable for hypoalbuminemia, hypocomplementemia, and lymphopenia, along with the presence of a positive test for antinuclear antibodies, double-stranded DNA, anti-Smith antibodies, and anti-ribonucleoprotein antibodies (see Table 2). A renal biopsy demonstrates proliferative glomerulonephritis (ISN Class III). Oral prednisone (20 mg po TID) and mycophenolate mofetil (MMF, 1,000 mg BID) were prescribed. After six weeks, her prednisone was tapered to 50 mg daily. By four months, the prednisone dose was reduced to 30 mg daily. She had minimal proteinuria, the serum complements normalized, and her blood pressure was <75th percentile for her age and height. Other clinical features (rash, arthritis, and serositis) were absent. The dose of prednisone was tapered further, but she does not return to clinic for almost five months (10 months following diagnosis).