You are here: Home / Articles / Eric Bloodaxe and the Etiology of Paget’s Disease
Print-Friendly Version / Save PDF

This summer, I decided to take a break from editorial writing and do some old-fashioned reporting while on vacation in England. I made this decision at an intriguing restaurant in a posh part of London. At dinner, one of my best friends, a British rheumatologist, and I engaged in a spirited discussion on the relative merits of our healthcare systems. Given our positions, I would have anticipated national loyalty, my friend touting the National Health Service (NHS) and me touting the American free market approach.

Instead our views were quite different. For my part, I expressed dismay about the inequities, inadequacies, and hassles of our healthcare system and the power of the ________ insurers (you fill in the blank). I told my friend that many Americans, including physicians, would be willing to try something new and accept a public option, if not a single payer system, an NHS-lite. 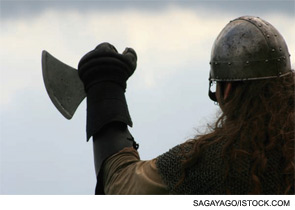 For his part, my friend expressed frustration with the NHS, with its escalating costs, cumbersome bureaucracy, and limitations on service. Furthermore, because my friend is subject to high taxes in the British system, he favored less, not more, public spending, with an expansion of the private sector via insurance pushing the public sector to better performance.

The evening was too enjoyable to have a serious debate. Imbibing a crisp wine for Gascogne to complement the imaginative curries, we moved onto less weighty subjects such as cricket and the Ashes, whatever they are. Nevertheless, I was inspired by our conversation to scope out the NHS on my vacation, knowing that the NHS is often cited as an example of what the United States should avoid—a centralized, socialistic (egad!) system where people queue up for joint replacements and doctors suffer from over-regulation.

With my reporter’s pad at the ready, I set off to answer the question of whether the impact of the NHS is visible in the English population. I know that this approach sounds very unscientific, but without an NIH grant and a squadron of research assistants, it was the best I could do.

After leaving London, we took the train to York, an extraordinary old city that is home to the largest cathedral in North Europe. The York Minster is a glorious gray-tan gothic structure that has acres of stained glass and could easily accommodate three or four Duke Chapels.

To determine the best route to the Minster from our hotel, I looked at a guide map that showed the twisted, maze-like paths of city that reprised hundreds of years of history. Near the junction of Lord Mayor’s Walk and Morkgate, I was surprised to see the location of an NHS clinic. How nice, I thought, to know where to go if I happened to flop on the rain-slicked steps of the old wall or suffer from the rages of gout after overindulging at a pub called The Three-Legged Mare.

As I walked through York’s crowded streets, I studied people for any sign of the NHS on their physiognomy. Certainly, some young people had hair that was colored outrageously—green, violet, or pink—but I did not think that such coloration reflected an untreated malady unless, of course, exhibitionism counts.

York has Viking roots and, at the recommendation of my friend, we went to the Jorvik Viking Centre which, at the site of an archeological dig, chronicles the lives of Vikings who arrived in the area in 866 AD. York sits on the layered ruins of past civilizations—Roman, Anglo-Saxon, Viking, and Norman—with the Jorvik excavation an especially rich find. As it happens, the place is a gold mine for a rheumatologist.

Rheumatologic Treasure of the Vikings

One of the bonanzas of the Jorvik excavation was a series of well-preserved skeletons which showed clearly that, among the afflictions of the Vikings, musculoskeletal disease was high on the list. These skeletons had the telltale signs of degenerative disease, Schmorl’s nodes, Pott’s disease of the spine, and the most rip-roaring case of diffuse idiopathic skeletal hyperostosis (DISH) you have ever seen. As the exhibit sign explained, evidence for DISH goes back more than 70,000 years, with Neanderthals suffering from this condition. With a neck encased in bone, no wonder these prehistoric men always look dour.

One of the skeletons on display showed degenerative joint disease of the hips, with the acetabulum pock-mocked as if blasted with buckshot. Next to the skeleton in the exhibit case, the museum placed a shiny metal hip prosthesis to show what modern medicine would do for that poor old Viking. While pleased by the homage to modern medicine, I was struck by the sign that said that the prosthesis was “on loan” from the Pinderfields General Hospital in Wakefield. Why not a “gift,” I wondered. I know that the NHS has its fiscal woes, but I worried that, in a pinch, an orthopedist would sneak in at night to snatch the prosthesis, give it a little dusting and cleaning, and insert it into the leg of a grateful patient, diminishing the queue by one.

My favorite part of the Jorvik Centre was the discussion of a Viking named Egril, son of Skalla-Grim. From skeletal remains, forensic experts established that Egril suffered from Paget’s disease, with a head made massive with Pagetic bone. This condition explained not only his grotesque and menacing appearance but also his legendary resistance to sword blows and other unkind attacks. The exhibit also noted that Egril had cold feet, lethargy, and headache. Did he have another condition that is all too common today?

Along with the picture of Egril’s distorted cranium was a disquisition on diseases transmitted from the Vikings. These diseases include Dupuytren’s contracture, which is called by some the Viking disease (Did you know that? I certainly didn’t); heart disease; multiple sclerosis; and Paget’s disease, which is also rampant in Iceland, another Viking hangout.

One of the most fascinating but mystifying aspects of modern genetics concerns the reason for the perpetuation of genes for bad disease. Why should the chromosomes harbor DNA sequences that do mischief, such as stirring up arthritis or lupus? The usual explanation is that the gene in another context provides a selective advantage, with its protein product fighting malaria or the bubonic plague, for example. While the exhibit did not make the point explicitly, I could not help but wonder whether genes that strengthen the bones against swords, maces, and lances could have also caused Paget’s disease to flourish. When your enemy’s name is Eric Bloodaxe, your caput needs all the density it can get.

Gene–environment interactions are tricky to decipher, but when people lived by the sword and died by the sword, an occasional case of Paget’s disease may been a small price to pay for a gene that makes the bones veritable armor. Did the brutal and unrelenting wars of the past put selective pressure on other genes? Maybe genes that promote blood clotting were a lifesaver for a soldier skewered on the battlefield. Scientists and religionists may both not like the idea, but I think that man is part of the environment that is making our genes evolve.

Enough musing and thoughts of the past. In a future column, I will describe what else I learned in York, this time about arthritis in modern England.