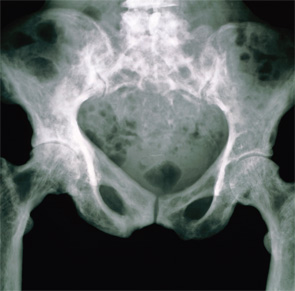 X-ray showing the pelvis of a person with Paget’s disease or osteitis deformans. The pelvic bones have a mottled appearance due to their increased porosity.
Image Credit: SPL /Science Source

CHICAGO—A 49-year-old woman has had RA for eight years. She has a rheumatoid factor reading of 35, an aCCP reading of 160, erythrocyte sedimentation rate of 42, plus erosions. She has been on methotrexate. She tried etanercept for six months, but then it stopped working. She was on 40 mg of adalimumab weekly, but it gave her a rash. Golimumab was ineffective; abatacept didn’t seem to work; rituximab gave her sinusitis twice; and tocilizumab seemed to be effective, but caused her liver function test readings to rise.

“Nothing seemed to work,” said Daniel Furst, MD, director of the Rheumatology Clinical Research Center at the University of California Los Angeles, who presented the case at the American College of Rheumatology’s 2015 State-of-the-Art Clinical Symposium in May, in a talk designed to get clinicians to think “outside the box.”

In other talks in an a la carte session, speakers covered the latest on Paget’s disease of bone and how to make decisions on imaging.

For the patient for whom nothing seems to work, Dr. Furst suggested an approach: a concept he calls “the principle of non-overlap.” It’s based on the idea that combination therapies that don’t overlap in mechanism of action and toxicity stand a better chance of being effective.

“This isn’t infallible, but it’s a reasonable way to approach it,” he said. Plus, when it comes to toxicities not overlapping, “if you’re going to get a side effect, at least you’ll know which drug it’s due to.”

Methotrexate and cyclosporine, for example, overlap on their IL-2 effect, but not much else, and data show that they work well together.

For patients like his difficult-to-treat 49-year-old patient, he suggested restarting abatacept, and using cyclosporine because it has a different mechanism of action. If that’s not helpful enough, add tofacitinib.

In another case, a woman kept getting UTIs and wanted a therapy without infections. The research, Dr. Furst said, shows that etanercept has the lowest infection rates among TNF inhibitors, but that non-TNF inhibitors should be considered as well.

He used another case to draw attention to the importance of screening for hepatitis B and C: A 28-year-old man returned from Taiwan. He has had RA for three years, with a slightly elevated RF level and no erosions, but he has an ESR of 60, is fatigued and has tender hands and a few swollen joints.