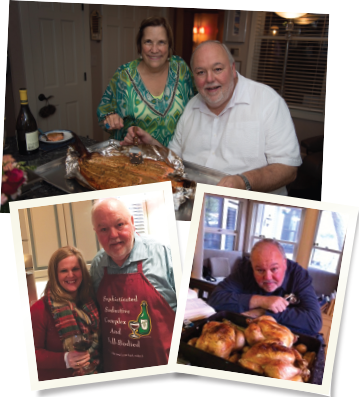 In addition to the classroom and exam room, the other room Joseph Flood, MD, enjoys spending time in is the kitchen. With a mother who worked as a local tavern cook and a policeman father who enjoyed preparing tasty meals as much as arresting bad guys, Dr. Flood, a rheumatologist at the Columbus Arthritis Center and professor of internal medicine at The Ohio State University (OSU), was genetically bound to be a food connoisseur.

“When I was a kid, food was always the way that our family expressed love,” he says, crediting his multi-ethnic relatives for not only his culinary skills but also teaching him that cooking was not woman’s work. “If it was okay for my dad to be in the kitchen, it was okay for me.”

More than 50 years later, Dr. Flood still enjoys preparing his father’s famous puffed shrimp and his aunt’s delicious Slovenian pastry, potica. As a self-proclaimed aficionado of food, he says food must not only taste good, but also be safe, locally sourced and cherished.

Dr. Flood completed his medical education and training at Georgetown University School of Medicine. He graduated medical school in 1979 and then finished his intern­ship in 1980, residency in 1982 and fellowship in 1984.

Initially, his goal was to treat poor people in the inner city of Cleveland, where he was raised. But because Georgetown didn’t offer a family practice program, his interests turned to neurology.

“I fell in love with the brain,” says Dr. Flood. “But in my fourth year of medical school, I was doing an elaborate procedure to see how deeply in coma a patient was in the intensive care unit. I thought how interesting it was that I was doing that procedure but how little good I was doing for that patient.”

His focus then switched to internal medicine. After completing a rotation in rheumatology, he realized the field offered everything he wanted: interesting, esoteric diseases, exciting breaththroughs in the immune system and, above all, longitudinal care—long-term patient relationships.

Shortly after completing his fellowship, the Central Ohio Medical Group offered him the perfect job: a rheumatology position in its large practice along with an appointment in an affiliated residency program. It also offered the prospect of a faculty appointment at the OSU College of Medicine.

It was a no-brainer. Dr. Flood accepted the position. He and his wife, Jeanne Likins, who holds a PhD in higher education, student development, moved in 1984, settling down in German Village, an historic neighborhood in Columbus that’s one of the largest, privately funded historic districts in the country.

“We still live in this home, 34 years later, the only one we’ve ever owned,” he says. “It sits in one of the most beautiful neighborhoods you’ll ever see.”

Dr. Flood left the multispecialty group after it was purchased by a large hospital and then practiced solo for the next 15 years. Meanwhile, he worked his way up from assistant professor to clinical professor of internal medicine at OSU. He joined the Columbus Arthritis Center in 2012, where he still practices today.

Since then, Dr. Flood has served as president of the ACR (2013–14) and has been designated a Master of the College.

Some of Dr. Flood’s recipes were passed down from his mother and instantly remind him of his childhood.

“My mother learned to make chicken paprikash from her mother,” he says, adding that it’s a popular Hungarian dish. “When I cook it, smell it and put it together, it brings back wonderful memories of her and her passion for food.”

His father, however, preferred making Chinese food. Dr. Flood jokes that his family was probably the first non-Chinese family in Cleveland to own a wok. Among Dr. Flood’s favorite dishes of his father’s is barbecued beef.

“He would go to his favorite Asian restaurants and [get] the recipe out of the owners, who were usually kind to him because he was the cop on the beat in their neighborhood,” Dr. Flood says.

Every year, Dr. Flood says his neighborhood offers a tour of 10 historic houses in the community as a fundraiser for the German Village Society, which maintains the historic neighborhood. Dr. Flood and his wife, along with other members of the historic community, sell tickets to dinner parties hosted in their own homes, donating all proceeds to the society.

The couple’s dinners are very popular and sometimes sell out immediately. Over the past several years, they have enjoyed the company of many guests, including Timothy Laing, MD, a rheumatologist at the University of Michigan, and his wife, Kathy Laing, MD, a dermatologist in private practice.

Despite Dr. Flood’s commitment to preparing fantastic meals, the cooking gods are not always on his side. He recalls one dinner when he was preparing porchetta, an Italian-style pork roast wrapped in pork belly that was supposed to be crispy on the outside, tender and juicy in the middle. “I didn’t think it was crispy enough, so I put it back in the oven,” he says, adding that his dinner guests had very sophisticated palates. “We almost had to use chisels to cut through the skin. It was comical. Skin was flying everywhere around the table, but everyone still seemed to enjoy it.”

Occasionally, Dr. Flood craves simple foods, too. After closing the window blinds at home to ensure no one sees him, he’ll eat a grilled cheese or peanut butter and jelly sandwich. Shhh! Please keep this information to yourself. Dr. Flood has a reputation to protect as a member of Slow Food, an Italian-based society whose members are food lovers from around the world.

“Food preparation should be a labor of love,” says Dr. Flood. “You should use the best ingredients. The food should be communally made, if possible. It should be good, clean and fair. That’s how we eat, that’s how we live.”