You are here: Home / Articles / Your Representatives on Capitol Hill
Print-Friendly Version / Save PDF 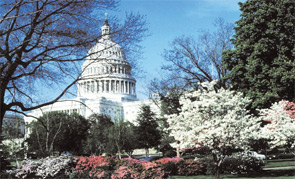 This is the first in a series of articles profiling the committees of the ACR.

The ACR Government Affairs Committee has a long list of accomplishments from the past year—renewing funding for the Centers for Disease Control lupus registry, gathering congressional support for the Arthritis bill, and advocating for a simplified Medicare Part D, to name a few.

The committee—a group of dedicated volunteers, ACR staff, and a professional lobbying firm—advances rheumatology through advocacy, including advocating for government legislation and policies.

The committee is led by Joseph Flood, MD, president of Musculoskeletal Medical Specialties, Inc., and a clinical faculty member at the Ohio State University College of Medicine and Public Health in Columbus. Dr. Flood has a long history of volunteering for ACR committees.

“In the early ’90s I spent five years on the Committee for Rheumatologic Care, and for four or five years I was the one-person Practice Advocacy Subcommittee, dealing with Medicare issues. This was replaced by the Regional Advisory Council,” he says. “I joined the Government Affairs Committee for a year as a member, and I just started my third year as chair.”

Dr. Flood says he joined the committee because of his interest in public policy. “I spent 10 years in Washington, D.C., during my internship, residency, and fellowship,” he recalls. “I’d always been interested in government, and being in D.C. for those years piqued that interest.”

What the Committee Does

The Government Affairs Committee was formed in 1995; prior to that, both the ACR Committee on Rheumatologic Care and the Committee on Research had legislative affairs subcommittees. “Our mission is to represent the college and its members to the federal government and its agencies,” explains Dr. Flood. “Those agencies include CMS [Centers for Medicare & Medicaid Services], the Food and Drug Administration, the National Institutes of Health [NIH], and others.”

The committee focuses on issues that affect physicians and their patients. “We have policy statements, including increased advocacy for improving reimbursement from both government and private payers,” says Dr. Flood. “We often work in collaboration with the American Medical Association and the American College of Physicians; we try not to duplicate efforts of other medical associations, and we have representatives in both these groups.”

The committee actively promotes ACR policy statements. “We lobby Congress,” says Dr. Flood. “We’re in our second year working with Patton Boggs, a powerhouse lobbying agency. There are three people on the healthcare team there that we work with.”

Advocating on Behalf of Members and Patients

One of the big issues for the Government Affairs Committee is increasing federal funding for organizations that contribute to medical research. “We also advocate for funding for research for NIH,” says Dr. Flood. “We support a substantial increase for their budget; during the last two years, this budget has been flat and the proposed budget would keep it flat.”