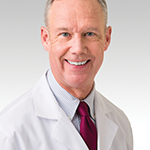 Balance
We live in an era of increasing concern about work–life balance and physician burnout. Cal found the right balance. During the years I worked with him, I knew that he and his family spent most summer weekends at their home in Northern Michigan. It was only at his memorial service when I heard stories of those summers, though, that I realized just how much that home meant to him. With family and close friends, who also became family, his lake home was the perfect foil for the intensity and dedication he brought to his career.

In the end, what I’ll most remember about Cal, and what I can only hope to aspire to, was his humanity. Cal was the colleague we all wish we could have. He was remarkably selfless, always willing to lend a hand, or cover for faculty needing some help, often without being asked—and never expecting anything in return. At his memorial, his neighbor in Michigan, with whom Cal drove back and forth on summer weekends for years, recalled a discussion on one of their first trips about paying for gas and food. “Not to worry,” Cal said. “It will all come out in the wash.” I had to laugh, as I’d heard him say the very same thing many times. We were colleagues, he believed, and, like family, you just did what needed to be done.

Our Loss
Cal’s loss was a blow to the rheumatology community. He gave so much, and he had so much more to give. While I feel that loss personally, I am grateful for the opportunity to have known Cal, and to have worked with him. The clinic workroom feels a bit empty these days, and yet it feels as though that emptiness has a purpose: It serves as a reminder of the kind of physician Cal was—and the kind of physician we should all hope to be.

Eric Ruderman, MD, is a professor of medicine in rheumatology at Northwestern University Feinberg School of Medicine, Chicago.

Editor’s note: The Rheumatologist had a Q&A with Dr. Brown in August 2019. You can read it here.

Feel free to leave a note for his family or share your own memory of Dr. Brown on the memorial page.