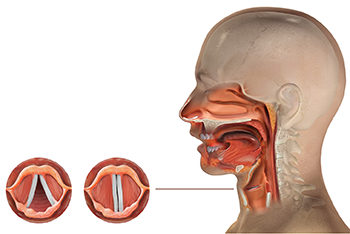 Primary Sjögren’s syndrome is a systemic autoimmune condition noted for findings of xerostomia, keratoconjunctivitis sicca and focal lymphocyte infiltrate in salivary glands.1 In the initial publications regarding keratoconjunctivitis sicca, Henrik Sjögren, a Swedish ophthalmologist, described a group of 19 women with dry eyes, some of whom had other organ dryness and inflammatory infiltrates.2,3 The syndrome that took his name can also involve extraglandular organs and include inflammatory arthritis, interstitial lung disease, pericarditis, myocarditis, primary biliary cirrhosis, vasculitis and blood dyscrasia. Laryngeal involvement is rare and is often missed as an initial manifestation of Sjögren’s syndrome.4

A 41-year-old Caucasian female with no significant past medical history was referred for rheumatologic evaluation by her primary care physician after she experienced fatigue, xerophthalmia (i.e., abnormal dryness of the conjunctiva and cornea of the eye, with inflammation and ridge formation), xerostomia (i.e., oral dryness), triphasic color changes in her digits with exposure to cold and stress, and dyspareunia (i.e., difficult or painful sexual intercourse). These symptoms had been progressively worsening over the span of 18 months.

The patient reported a history of difficulty speaking (i.e., dysphonia) that started six to 12 months before the previously mentioned symptoms developed. However, she was not evaluated by an otolaryngologist until after her rheumatologic workup was initiated.

On exam, the patient had evidence of xerostomia with poor oral dentition. She denied keeping up to date with dental hygiene. She was also found to have a noticeable dysphonia. No obvious parotid, submandibular or cervical lymphadenopathy was noted. Her cardiopulmonary exam did not reveal any abnormal findings. The musculoskeletal exam did not reveal obvious synovitis. No other mucocutaneous lesions were noted.

Given a high level of suspicion for Sjögren’s syndrome (with history of sicca symptoms and objective finding of xerostomia), she was referred to an otolaryngologist to pursue a minor salivary gland biopsy.

Upon the initial exam by the otolaryngologist, a flexible laryngoscopy was done to investigate her dysphonia. The exam revealed unilateral, complete vocal fold immobility. The minor salivary gland biopsy revealed inflammatory focus of greater than 60 inflammatory cells, confirming the diagnosis of Sjögren’s syndrome.

Treatment with 40 mg of prednisone and 300 mg of hydroxychloroquine daily was initiated. A steroid taper was suggested over six weeks.

The patient’s dysphonia and exertional dyspnea dramatically improved within one to two weeks after treatment was started. Repeat flexible laryngoscopy revealed normal mobility of both vocal folds and a complete recovery of the unilateral immobility.

Referral to ophthalmology was placed for keratoconjunctivitis sicca. After she failed to use artificial tears regularly, the patient was placed on a cyclosporin ophthalmic solution, which significantly helped reduce her dry eye symptoms.