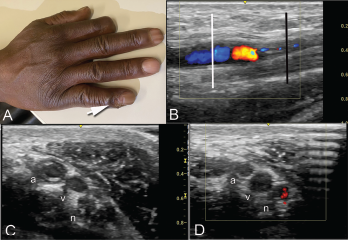 Clockwise from top: Image A shows the periungual ulceration (arrow) of the fifth digit, as well as the prior amputation of the second digit. Image B shows a longitudinal ultrasound of the palmar aspect of the ulnar right wrist. In the center of the image, the ulnar artery is in view and color Doppler flow is visualized within the vessel until there is a reversal of flow demonstrated by color change, followed by severe attenuation of flow distally. Distal to the cessation of flow, the vessel appears hypoechoic due to proliferation of the intima to the point of occluding the lumen. Image C shows a transverse view at the level of white line in Image B, with endothelial proliferation seen around a central lumen of the artery (a), next to the vein (v) and ulnar nerve (n). Image D, shows a transverse view at the level of the black line in Image B, where the arterial lumen (a) is occluded.

A 51-year-old man with a history of limited systemic sclerosis with Raynaud’s phenomenon and pulmonary hypertension being treated with tadalafil and macitentan presented to a clinic with ulceration of his right pinkie. The patient had injured the finger two months earlier. He reported poor healing and the presence of a persistent ulcer since the injury.

The patient had a history of a prior ulceration of the right index finger, which led to an amputation in 2011. He had no history of lower extremity vascular disease, diabetes mellitus or hypertension, but had smoked one pack of cigarettes per day for 20 years, quitting 10 years before.

On exam, a small ulcer was seen at the distal cuticle of the right pinkie, without weeping or expressible material (see Figure 1A). An ultrasound performed on the right upper extremity to evaluate the vasculature of the right hand showed intimal proliferation and vascular occlusion at the level of the pisiform (see Figures 1B, C and D).

The patient received an ulnar nerve block to relieve the pain and help improve perfusion. A surgical referral was placed for a sympathectomy and ulnar artery revascularization.

This patient had macrovascular involve­ment of the ulnar artery as a manifestation of his systemic sclerosis, which was evidenced by bedside ultrasound showing concentric arterial thickening with decreased blood flow.

A hallmark of systemic sclerosis is widespread vascular dysfunction and progressive fibrosis of the skin and internal organs.1 The main vascular complications of systemic sclerosis include Raynaud’s phenomenon with ischemic digital ulcers, pulmonary arterial hypertension and scleroderma renal crisis. These complications occur due to endothelial injury, intimal thickening with narrowing and obliteration of microvasculature.1,2 Although microvascular involvement is a well-known component of the disease, large vessel involvement has also been described, particularly in the ulnar artery.3–6

Using arterial Doppler studies, Stafford et al. showed an increased prevalence of ulnar artery stenosis in more than half of the patients with systemic sclerosis compared with matched controls, with no significant differences between the two groups in other large arteries.3

Additionally, ulnar artery occlusion is associated with microvascular disease, as assessed by nailfold capillaroscopy, and has a stronger association with digital ulcerations (odds ratio: 10.7) than capillaroscopic abnormalities.8

Ulnar artery revascularization was reported to produce dramatic improvement in the healing of digital ulcers in eight patients with severe scleroderma-related vasculopathy.4 Because ulnar artery occlusion can predict development of digital ulcers in patients with systemic sclerosis, ultrasound may be useful for patient selection into trials for the treatment of vasculopathy.

This case highlights the value of hand ultrasound for rheumatologists treating patients with systemic sclerosis.