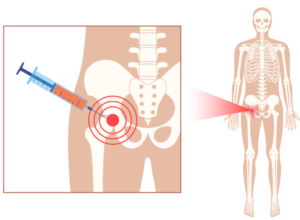 NEW YORK (Reuters Health)—A single injection into the hip of steroid and local anesthetic improved pain and function in patients with hip osteoarthritis in a randomized controlled trial, with most of the benefit seen early after treatment.

Patients were at least 40 years old, with moderate to severe hip pain on most days for at least six weeks and a diagnosis of hip osteoarthritis within the last two years based on clinical history, examination and imaging. Patients were excluded if they had steroid injections in the past three months, previous hip surgery or infection.

The primary outcome was pain at six months as reflected on a 0-10 numerical rating score. Secondary outcomes included pain, stiffness and physical function (Western Ontario and McMaster Universities Osteoarthritis Index [WOMAC] scores), pain self-efficacy, patient’s impression of pain, general health, return to work and satisfaction with treatment. Follow up questionnaires were mailed to patients at two weeks and at two, four and six months; the average weighted follow up rate was 93%.

There was no difference in hip pain intensity over six months between the triamcinolone-lidocaine and the lidocaine injection groups (−0.52 (−1.21 to 0.18)). However, significantly higher overall mean improvement was seen in secondary outcomes such as pain self-efficacy, quality of life, WOMAC score, global impression of change, and sleep disturbances. Again, differences were greatest at earlier time points rather than during later follow up.

The presence of ultrasound confirmed synovitis or effusion was associated with a significant interaction effect favoring treatment with triamcinolone-lidocaine (−1.70 (−3.10 to −0.30)).