You are here: Home / Articles / NSAIDs: The Heart of the Controversy
Print-Friendly Version / Save PDF

Nonsteroidal anti-inflammatory drugs (NSAIDs) have received much negative attention during the last few years—particularly because of concerns about cardiovascular side effects when they are used to treat RA and osteoarthritis. These concerns contributed to Merck’s decision to withdraw the COX-2 inhibitor rofecoxib from the market in 2004, followed a year later by Pfizer’s withdrawal of a similar medication, valdecoxib. The controversy again heated up early in 2007 when the American Heart Association (AHA) issued a Scientific Statement containing guidelines for the use of all NSAIDs in those with cardiovascular problems or risk factors for ischemic heart disease.1

What the AHA Statement Says

“Our Scientific Statement was a review of the evidence suggesting that NSAIDs may impose an increased risk of heart attack, stroke, and death in patients with known heart disease or who are at risk for ischemic heart disease,” says Elliott M. Antman, MD, director of the coronary care unit at Brigham and Women’s Hospital in Boston and lead author of the article. “Although disease-modifying therapy is very much in the front line of treatment to decrease inflammation and joint damage, at some point consideration will be given to relieving pain. The statement indicates the level of risk as perceived by the American Heart Association for the various drugs and recommends a five-step approach starting with those medications seen as having less cardiovascular risk and moving progressively toward those with higher cardiovascular risks.”

The rheumatologist knows that all NSAIDs can cause many kinds of side effects and they must be used at the lowest possible dose for the shortest possible amount of time.
—Steven B. Abramson, MD

While stressing that they are not trying to overstep the domain of rheumatologists, the authors suggest what they called a “stepped care approach” starting off with acetaminophen, acetylsalicylic acid (ASA), and narcotic analgesics; followed by nonacetylated salicylates; then non COX-2 selective medications; NSAIDs with some COX-2 activity; and reserving COX-2 selective drugs for a last resort. (See Figure 1) 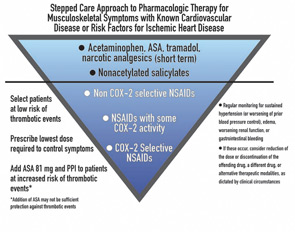 click for large version
figure 1: The AHA guidelines for NSAID use recommend this stepped approach to pharmacological therapy for all patients with known cardiovascular disease or who are at risk for ischemic heart disease. Source: Circulation. 2007;115:1639

“[The COX-2 inhibitors] are a class of drugs that are not necessarily more effective than traditional drugs, are associated with an increased cardiovascular risk, and do not offer as much gastrointestinal tract protection as originally thought,” says Dr. Antman. “Given all of that, the Scientific Statement says that in patients with heart disease or risk for ischemic heart disease, they should be the last group of medications tried.”

There was a consensus among the rheumatologists interviewed for this article that the AHA Statement was oversimplified and only addressed the cardiovascular side effects while ignoring concerns about other types of adverse effects.