As the push for evidence-based medicine and quality improvement becomes greater—and more firmly tied to physician compensation—rheumatologists are looking for ways to make best practices part of their everyday practice. One initiative, the Pediatric Rheumatology Care and Outcomes Improvement Network (PR-COIN), is using the latest clinical evidence and a network of collaborators to improve outcomes for children with juvenile idiopathic arthritis (JIA).

In 2011, PR-COIN was launched as part of a broader movement within rheumatology and other medical specialties to participate in quality improvement (QI) projects that can be seen as bridging the gap between evidence-based treatment guidelines and actual clinical practice that often lags behind adoption of such guidelines. To achieve the ultimate goal of improving patient outcomes, QI initiatives, such as PR-COIN, are being used to help physicians measure, assess, and improve their performance to deliver the best care possible. As such, these initiatives are being incorporated in the performance in practice part of the Maintenance of Certification (MOC) program.

“PR-COIN is one example in rheumatology of the MOC program,” says Peter Margolis, MD, PhD, professor of pediatrics and director of research at the James M. Anderson Center for Health Systems Excellence at Cincinnati Children’s Hospital Medical Center, Cincinnati, Ohio, the center through which the PR-COIN initiative is coordinated.

“The global aim of PR-COIN is to build a sustainable network to improve patient outcomes in juvenile idiopathic arthritis,” says Esi Morgan DeWitt, MD, MSCE, a pediatric rheumatologist in the division of rheumatology at the James M. Anderson Center for Health Systems Excellence at the Cincinnati Children’s Hospital Medical Center, who also chairs the steering committee and coordination team for PR-COIN. This multicenter network uses proven QI methods that are paired with evidence-based interventions to achieve specific clinical outcomes.

As shown in Figure 1, key interventions include: auditing performance and outcomes of care with registry data, use of a population management tool, previsit planning, self-management and patient engagement, and treatment guidelines. Centers participating in the PR-COIN network implement these interventions and can then study the effect of the interventions on outcomes by analyzing their patients’ data. The initial aim of the project is to achieve the process and clinical outcomes shown in the left-hand column of Figure 1 and highlighted in Table 1 by June 30, 2013. Other process improvement measures that PR-COIN participants are tracking are shown in Table 2.

Critical to the success of PR-COIN is its primary role as a learning network. To that end, along with providing participants examples of successful interventions to achieve the outcomes, participants also receive coaching and training in QI tools and techniques through periodic webinars and workshops. Teams readily share their experiences with others in the network through monthly reports and “action period” conference calls. Currently, Dr. DeWitt says, 11 academic health center sites are participating and each site has a multidisciplinary team that may include rheumatologists, nurses, other health professionals, clinical research coordinators, and fellows.

Another critical component is the collection of all patient data in a common registry, the ACR Rheumatology Clinical Registry. According to Dr. DeWitt, data are analyzed in aggregate and at the individual site level to allow for benchmarking and sharing of best practices. “During these action-period calls that occur every month, we review the data and we look at where we are improving and where we need to improve,” she says.

A current focus across the learning network teams is previsit planning. “Previsit planning is members of a care team preparing in advance of the patient visit to best meet [the patient’s] needs,” says Dr. DeWitt. “We can review performance on the process measures at the patient level (e.g., labs, uveitis screening) like a checklist, and during previsit planning, teams can review how patients are doing in terms of disease control and if treatment changes might be made.” This process may lead to more efficiency, standardization of care practices, and freeing up time during the visit to address priority areas to the patient, she added.

Aggregate data show that toxicity monitoring is above target at 92% for patients just prescribed disease-modifying antirheumatic drugs (DMARDs) and about 78% for patients who have been on DMARDs longer. Uveitis screening is about 88%, Dr. DeWitt says. 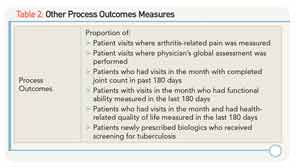 Reports from the Field: What Participants in PR-COIN Have to Say

For Stacy Ardoin, MD, assistant professor of rheumatology and immunology at Nationwide Children’s Hospital, Columbus, OH, participation in PR-COIN has resulted in a number of important improvements in JIA care. She says, for example, that she and her collegues have started collecting some standard outcome measures that they previously were not collecting, such as a regular pain score, by documenting the joint count in a consistent way, and assessing the general activity of disease. The monthly reports they get through PR-COIN show that they’ve made tremendous increases in all functional measures. “For example,” she says,” collecting a pain measure went from 0% to 100% and documented joint count went from 20% to 80%,” she says.

Ronald Laxer, MD, a rheumatologist at the Hospital for Sick Children in Toronto, Ontario, also says that his institution has seen significant improvement in a number of process measures since the launch of the initiative. For example, he says that although he and his colleagues thought they were monitoring their JIA patients to get their eyes checked at certain intervals, when they looked at their medical charts they found that only about 10% of patients had reports from their ophthalmologists. “So with the support of PR-COIN we instituted new processes and we are up to about 60% of patients who now have ophthalmology reports included in the medical records,” he says.

He also emphasized the benefit of the tools provided by PR-COIN to assist with previsit planning, which he says his institution has implemented with good results. “Doing previsit planning, we document all the critically important factors that need to be attended to and determine what needs to be done at that visit, so the visit is much smoother, prevents redundancies, and ensures that what needs to be done gets done in an efficient manner,” he says.

For Catherine April Bingham, MD, a pediatric rheumatologist at Penn State Hershey Children’s Hospital, Hershey, Pa., a key benefit of participating in the initiative is the networking and sharing of information that facilitates rapid spread of improvement. “One site figures out how to do something really well, shares it, and the others in the network can immediately implement it without having to go through all the steps themselves,” she says.

She emphasizes that PR-COIN has allowed her and her colleagues to work toward change and to know how to do it. “I think it is exciting that PR-COIN gives you certain tools,” she says. “I feel more empowered to work on things that are just not working in critical care.”

Does It Benefit the Patient?

The benefits patients receive when their physicians participate in a network such as PR-COIN are demonstrated by the improved outcomes seen in six other networks currently operating through the James M. Anderson Center for Health Systems Excellence at Cincinnati Children’s Hospital Medical Center. The most advanced network, which is on inflammatory bowel disease (IBD), has seen an increase in remission rates in kids with IBM from about 60% in 2007 when the initiative began to over 75% currently, according to Peter Margolis, MD, PhD, who is the center’s director of research, as well as a professor of pediatrics. “This increase in remission rates of IBD is without the introduction of new medications and is the result of delivering care better,” he emphasizes. The IBD network started with 10 centers and has grown to 51 centers with a current registry of 15,000 patients.

Other networks have also seen remarkable results, he says, highlighting a 50% reduction in bloodstream infections in intensive care units (ICUs) for children through the Solutions for Patient Safety network (http://solutionsforpatientsafety.org/), and reductions in the percentage of mothers who have preterm deliveries because of elective delivery through the Ohio Perinatal Collaborative Quality Collaborative network (https://opqc.net/). “The results are pretty remarkable,” he says. “As physicians, we sometimes don’t realize it, but there are gaps in our clinical care. Patients slip through the cracks: they may not come back with proper frequency, physicians forget to increase a medication dose or order a lab test. All of this adds up and you have patients whose health is not as good as it could be.”

Overcoming the Lake Wobegon Effect and Other Challenges

Nothing comes without its downside, but for the most part, the downside to participating in a network such as the PR-COIN is one of time and psychology. According to Dr. Margolis, one of the biggest and first challenges of joining a network is psychological: “As physicians, we all think we are doing a really good job; when we measure our performance, we are never as good as we think we are.” He describes this as the Lake Wobegon effect, where physicians think they are above average when there are places where the care they provide could be better. He attributes this not to a lack of hard work by physicians, but to the system they work in. “Our effectiveness depends on creating a system that is working well,” he emphasized.

An additional barrier comes from not fully understanding the need and role of a network like PR-COIN. “One of the big hurdles is to understand quality-improvement work,” says Dr. Bingham, who says that it takes a fair amount of education to get clinicians to understand what QI work is all about.

Dr. Margolis also highlighted the need to educate physicians and staff about quality improvement methods, which, he says, focuses on incremental change. He emphasized the need for physicians and institutions to make very small changes in care delivery first, try them out on a small scale, and only then expand them to the rest of the practice.

Another major challenge cited by all is the time commitment necessary to get a network developed and implemented, including the time needed for enrolling patients. However, all expressed the long-term payoff of making time to get the PR-COIN network in place. “Everyone is busy, so in the beginning this seems like extra work and you don’t see the payoff immediately,” says Dr. Laxer. “But as a team, we now feel so much better about some of our clinic processes, and that has increased our work satisfaction. You can’t put a cost on that.”

Mary Beth Nierengarten is a freelance medical journalist based in St. Paul, Minn.