You are here: Home / Articles / Research on IL-17 Cytokine May Lead to Novel Therapies for RA
Print-Friendly Version / Save PDF

Research in the laboratory of John D. Mountz, MD, PhD, is opening up a whole new field of study in rheumatoid arthritis (RA).

Using funds from an ACR Research and Education Foundation (REF) Within our Reach: Finding a Cure for Rheumatoid Arthritis research grant, Dr. Mountz’s lab at the University of Alabama at Birmingham is investigating the pathways through which the interleukin (IL)-17 cytokine acts on B cells. One study looked at mice that developed spontaneous germinal centers in their spleens.

“What is interesting about these mice is that the antibodies are very pathogenic. Autoantibodies from these mice can transfer arthritis,” Dr. Mountz said. “The mechanism underlying the germinal center response is particularly applicable to understanding rheumatoid arthritis.”

The study’s goal was to determine the mechanism that was causing pathogenic, arthritis-inducing autoantibodies. 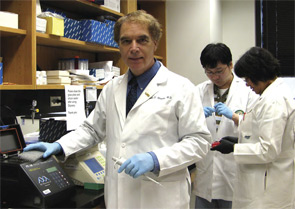 Dr. Mountz (foreground) and colleagues in the University of Alabama research laboratory.

“There were elevated cytokines in these mice—one of the most elevated was IL-17, which was both satisfying and puzzling. [It was] satisfying because we knew it was one of the key cytokines elevated in rheumatoid arthritis. [It was] puzzling because, up to that time, IL-17 had not been reported to play a major role in the production of pathogenic autoantibodies,” Dr. Mountz said.

“We found that the IL-17 receptor was on B cells—no one had appreciated that before,” he continued. “We had known it was in other places, such as on neutrophils and synovial fibroblasts.”

Dr. Mountz’s focus has since turned to finding out how IL-17 acts on B cells, with the hopes of finding a novel target for treating RA. Novel therapies may inhibit IL-17, for example. Dr. Mountz compared it to anti–tumor necrosis factor–a therapy, which works for many arthritis patients but not all.

“This information will refocus clinicians and researchers on these antibodies. We have known that they are a factor, but where are they made? How are they made? These are very important questions, and this is a new mechanism for how it might work—its ability to drive B cell autoantibody production,” Dr. Mountz said.

“When we made the discovery in this mouse, it was so new I couldn’t get funding for it,” he noted. “It took the visionary group of people at REF’s Within Our Reach program to put faith in this, and the direction of my whole laboratory has changed. I think we have come very far with our findings, and we have begun to understand the new role of a pathogenic cytokine in rheumatoid arthritis.”