You are here: Home / Articles / Researchers Look for Therapeutic Clues to Sjögrens Syndrome in Neural Pathways
Print-Friendly Version / Save PDF 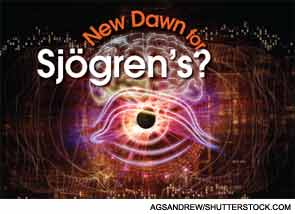 “And yet it moves” is a phrase said to have been uttered before the Roman Inquisition by the Italian mathematician, physicist, and philosopher Galileo Galilei in 1633 after being forced to recant his “belief” that the Earth moves around the Sun. As such, the phrase is used today as a sort of pithy retort to imply that it doesn’t matter what you believe, these are the facts.

By analogy to Galileo and his challenge to the “orthodoxy” of accepted measurements, our current trials of biologic therapies in Sjögren’s syndrome (SS) have been based on targeting a variety of cytokines and their receptors. These are targets that have been identified as exhibiting altered expression in blood and glandular tissues. In our clinical trials with biologic agents, we have succeeded in improving a spectrum of extraglandular manifestations and associated biomarkers.

However, the most disabling symptoms of ocular and oral discomfort, fatigue, and myalgias have not shown significant differences in clinical trials with biologic agents.1,2 The fact that we have improved the extraglandular features and biomarkers in these trials should not be minimized. These are the elements that can be easily measured. In our rheumatology clinic, we note that:

The situation is far more complicated than treating patients with polymyalgia rheumatica, where we have a wonderful clinical correlation with the ESR and emerge as superheroes in the eyes of patients following their first dose of steroids.

The inadequately explained relationship between objective findings and symptoms in SS is more suggestive of neuropathic pain. Impaired, descending neural inhibition and the resulting failure to control physiologic pain amplification (central sensitization) have been implicated in chronic peripheral pain.

In chronic ocular or oral pain, local inflammation initiates neural stimulation at both the mucosal surface and at the level of the trigeminal nuclei. The integration and cortical processing of those pain signals is not well correlated with markers of systemic inflammation. These neural processes, particularly at the trigeminal nerve and brain cortex, are modulated by chronic exposure to cytokines released from microglial cells.3

By analogy to the quote from Galileo, this is currently the nonmeasurable variable that we must first measure and then use to direct future therapy.