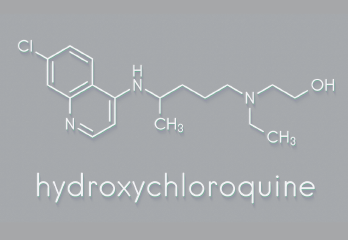 CHICAGO—The correct dosing of hydroxychloroquine (HCQ) for systemic lupus erythematosus (SLE) is a concern of all rheumatologists. Petros Efthimiou, MD, clinical professor of medicine at New York University, New York City, opened the Great Debate of the 2018 ACR/ARHP Annual Meeting by stating, “Today, we will be discussing a critical clinical problem that affects everyone’s practice.” He introduced Nathalie Costedoat-Chalumeau, MD, PhD, professor of internal medicine at Cochin Hospital, Paris, who began by introducing the pros and cons of the current HCQ controversy for patients with SLE. HCQ is indicated for the treatment of SLE, rheumatoid arthritis (RA) and other diseases.

Benefits of HCQ for Patients with SLE

Dr. Costedoat-Chalumeau explained the beneficial effects of HCQ for SLE are clear. The drug improves survival. It prevents SLE flares and protects against diabetes, thrombotic events and dyslipidemia. It may also prevent congenital heart block in infants born to women with SLE.1,2 Because HCQ is safe to use during pregnancy and breastfeeding, the European League Against Rheumatism highly recommends it as an option during pregnancy for women with SLE.

Unfortunately, HCQ is also associated with ophthalmologic side effects, specifically clinical retinopathy with a characteristic bull’s-eye maculopathy. The American Academy of Ophthalmology (AAO) thus has recommendations on screening for chloroquine and HCQ retinopathy based on the daily dose of medication and duration of treatment. Less than 1% of patients have retinopathy at five years, but 20% of patients may develop it by 20 years.3-5

Although a generally recognized safe daily dose of HCQ is 5 mg/kg/day, the great debate stems from the fact that this dosage is based on data from patients who effectively collected their medication in the pharmacy. Dr. Costedoat-Chalumeau explained that, unfortunately, many patients with SLE are not compliant with their prescription, and the collected dose is on average less than 50% of the prescribed dose. This means even if the physician prescribes more than 5 mg/kg, most patients will collect less than that amount, a dose in keeping with the recommendations. Because of this, some clinicians have proposed the HCQ daily dose should not be based on weight, but rather on blood levels. This is a feasible therapeutic approach because HCQ has a long half-life in the blood.

‘HCQ is the most important medication we have for lupus. It is the only medication that improves survival.’ —Michelle A. Petri, MD, MPH

Dr. Costedoat-Chalumeau then introduced the two experts who would be representing the two sides of the Great Debate: James T. Rosenbaum, MD, chair of the Division of Arthritis and Rheumatic Diseases at Oregon Health & Science University and chair of Ophthalmology at the Legacy Devers Eye Institute, Portland, Ore., who spoke for the AAO guidelines, and Michelle A. Petri, MD, MPH, professor of medicine at the Johns Hopkins University School of Medicine, Baltimore, who spoke in support of the notion that clinicians should not necessarily adhere to these guidelines.

Dr. Rosenbaum began by explaining the AAO first issued guidelines for monitoring HCQ in 2002. The guidelines were never intended to restrict the use of HCQ by rheumatologists, but rather to facilitate the prescription of HCQ by rheumatologists. He described the essentials of the guidelines, which recommend the maximum dose of HCQ should be ≤5.0 mg/kg of actual weight. In addition, patients should be given a baseline screening for retinopathy, as well as annual screenings at five years. Although optical coherence tomography and visual fields are considered the mainstays of screening, other screening options include autofluorescence or electroretinograms.

The guidelines emphasize the risk of toxic retinopathy in patients on long-term HCQ therapy and are based on data from 2,361 patients enrolled in Kaiser, Northern California, who took HCQ. That study found toxicity increases over time, and for patients at the highest dose, the risk of retinopathy can be quite high.5 The recommendations were meant to preserve patient health while taking HCQ. Thus, although Dr. Rosenbaum acknowledged antimalarials are a valuable part of a rheumatologist’s armamentarium, he felt great care must be taken to avoid antimalarial toxicity.

Dr. Petri began by reviewing the short- and long-term benefits of HCQ, which extend beyond its benefits for disease activity. She argued that, instead of being worried patients are being prescribed too much HCQ, clinicians should worry about patients who take too little. She worries that when ophthalmologists warn patients they may go blind from HCQ therapy, they contribute to the problem of compliance. The problem with HCQ adherence was underscored by a study that revealed that approximately half the patients with SLE were non-adherent.6 Moreover, 29% of adolescents and young adults with SLE had undetectable levels of HCQ in their blood and these levels correlated with refill rates.

In reviewing the 2016 AAO guidelines, Dr. Petri noted two quotes from the guidelines: 1) “Patients … should be informed about … proper dose levels”; and 2) “It is not clear that there is any truly ‘safe’ dosage for long durations of use.” Dr. Petri pointed out that once patients have been given this HCQ talk by their ophthalmologist, she often cannot get them to adhere to HCQ doses she prescribes.

These guidelines also make it difficult for her to have a conversation with her patients about why they may need a higher dose. “I worry that this whole discussion has been covered by fear. Fear of blindness,” she emphasized, adding, “There is no reason to make our patients so afraid of a very important drug.”

She concluded by explaining her defense of HCQ stems from the fact that she is protective of her patients. “HCQ is the most important medication we have for lupus. It is the only medication that improves survival,” she stated.

Both Dr. Rosenbaum and Dr. Petri encouraged rheumatologists and ophthalmologists to come together to revise the guidelines to reflect that HCQ is a critical medication for this patient population and that the prescription of HCQ is as much art as science.