One condition that deserves special attention is avascular necrosis. Unlike many other rheumatic complications of HIV, its incidence seems to be rising. People positive for HIV have roughly 10 times the rate of avascular necrosis compared with the general population.19 It is unclear whether this increased risk is due to HIV itself or due to a side effect of cART treatment. Because this condition may require urgent medical treatment, clinicians must maintain a high index of suspicion for avascular necrosis when investigating HIV-positive patients who have joint pain.20

Osteoporosis is another condition that deserves particular attention in the cART era. Although the etiology is not completely clear, patients who are HIV positive are at higher risk of bone fragility and bone fracture.21 Therapy with cART may actually reduce bone density in the short term, although this may decrease with time.19 Patients at particularly high risk of osteoporosis may need to undergo increased monitoring. They may also need to avoid specific HIV medications that increase osteoporosis risk, such as tenofovir and medication regimens based on protease inhibitors.21

Rheumatoid arthritis can appear quite similar to HIV-associated arthritis, but mistaking one for the other can lead to problems for patients.

Drug interactions are an area of key concern for rheumatologists treating HIV-positive patients, because antiretroviral therapies are among the types of drugs most likely to cause interactions.22 Around 40 drugs are currently approved by the FDA to treat HIV, and new drugs continue to be added. These include drugs in a number of different classes, including nucleoside/nucleotide reverse transcriptase inhibitors (NRTIs), non-nucleoside reverse transcriptase inhibitors (NNRTIs), entry inhibitors, integrase inhibitors, protease inhibitors (PIs), booster drugs and combination products. This makes it difficult even for specialists to be aware of all possible interactions.23,24 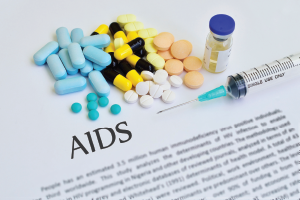 Glucocorticoid levels may be extremely variable when used with the drugs that treat HIV, leading to the risk of Cushing syndrome.
Jarun Ontakrai/shutterstock.com

One of the most important areas for concern is the potential for interaction between glucocorticoids and HIV drugs, specifically, protease inhibitors. These drugs include darunavir, lopinavir, saquinavir and ritonavir.23 These drugs have large effects on the cytochrome P450 enzyme system in the liver, specifically the enzyme CYP3A4. Because many glucocorticoids use this system as their major method of metabolism, glucocorticoid levels may become extremely variable when used with these HIV drugs, leading to the danger of Cushing syndrome.4

Dr. Calabrese points out, “Something as simple as a methylprednisolone dose pack can be cataclysmic if patients are on a drug such as ritonavir, which can increase the biologic effect of these drugs by 300 or 400%.” Because of its low threshold for toxicity, colchicine for gout is another treatment that must be used cautiously in combination with protease inhibitors and other HIV drugs that utilize the P450 system.25