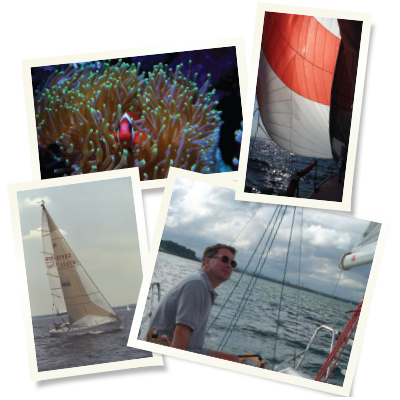 The family’s vacation home was on Little Egg Harbor Bay, which sits about five miles off the coast of New Jersey. Its backyard was stocked with five boats—a 12′ Sailfish, a 14′ Sunfish his brothers built in high school woodshop class and several daysailors.

“When my oldest brother was about 16 and got a job around the corner from where we lived washing dishes for $0.67 an hour, he decided after two days he didn’t like washing dishes and started giving sailing lessons on my father’s 20′ sailboat for about $3 an hour,” recalls Dr. Furie. “There was no other place to rent sailboats on the island.”

Nearly 50 years later, it’s hard for Dr. Furie to watch sailboats on the Atlantic without feeling a twinge of envy. Over the decades, he’s won more sailboat races than he can remember and attributes his mechanical, carpentry and even seamstress skills to the demands of his family’s business. Although his busy medical career and expanding family now occupy much of his time, he’ll always find time for sailing, which he calls his favorite “cerebral” hobby.

Developing into a Doctor & Sailor

Dr. Furie always wanted a science career in medicine. Perhaps that’s because his father, also a sailor, was an orthodontist, his oldest brother is a hematologist and middle brother is a retired dentist.

While attending Cornell University, Dr. Furie served as captain of the school’s freshman sailing team. Then he moved on to Weill Cornell Medical College—now called Weill Cornell Medicine—and graduated in 1979. He completed his internship and residency at New York Hospital from 1979–1982, and then pursued a fellowship in rheumatology at the Hospital for Special Surgery from 1982–1984.

The following year, he began working as a rheumatologist at Northwell Health, holding numerous academic and hospital appointments, including faculty positions at Weill Cornell Medical College, the Albert Einstein College of Medicine and the Hofstra Northwell School of Medicine.