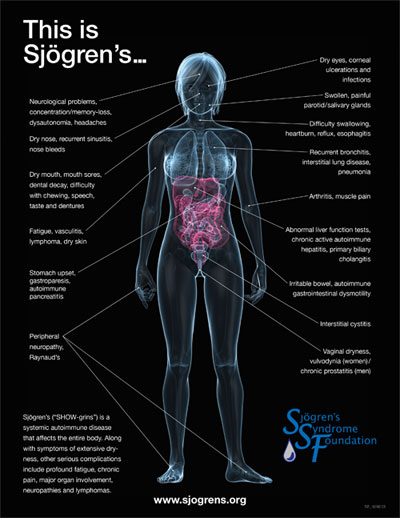 April is Sjögren’s Awareness Month and the perfect time for rheumatologists to become proactive and learn more about this autoimmune disease, including newly published, evidence-based guidelines. As many as 4 million Americans, mostly women, suffer from Sjögren’s syndrome, and as many as 2.5 million remain undiagnosed, according to the Sjögren’s Syndrome Foundation (SSF).1

This month, the SSF, which began the awareness campaign in 1998, will use its social media channels (Twitter @SjogrensOrg, Facebook @SjogrensSyndromeFoundation, and LinkedIn Sjögren’s Syndrome Foundation) to educate healthcare professionals and the general public about the disease, highlighting facts and figures, resources and patient testimonials. Key promotions this year include the results of SSF efforts to reduce time to diagnosis, increased interest in Sjögren’s-focused clinical trials and clinical practice guidelines published in the April 2017 issue of Arthritis Care & Research.2

“It is an exciting time,” says Nancy Carteron, MD, FACR, senior scientific consultant in rheumatology and immunology and clinical associate professor of medicine at the University of California, San Francisco. “I feel there has been a shift in awareness and understanding within a one- to two-year period. The number of people publishing novel research in Sjögren’s syndrome is exponentially increasing. And people are coming from other specialties, including hematology, pulmonology, dermatology … that is a really exciting thing, too. It is going to drive understanding of the disease.”

Many patients who develop Sjögren’s syndrome also suffer from rheumatoid arthritis or lupus, according to the American College of Rheumatology. Treatments target relief of the most bothersome symptoms, such as dry eyes and mouth, as well as preventing infections or dental disease.3

Dr. Carteron, who serves on the SSF Board of Directors and as chair of the SSF’s Medical and Scientific Advisory Board, notes that it wasn’t that long ago that Sjögren’s syndrome was considered a nuisance disease. In the past four years, however, the SSF has put forth a concentrated effort separate from the Awareness Month that has helped reduce the time to Sjögren’s diagnosis to less than three years, down from nearly six years in 2012. The SSF has set a goal to reduce that time to diagnosis for U.S. patients to 2.5 years by the end of 2017, according to CEO Steven Taylor. He says clinicians have looked at the data and “realized how serious [the illness] can become, and how it can lead to major ailments.”4

“Rheumatologists are really our first line of defense in recognizing, diagnosing and properly treating Sjögren’s disease,” he says. “These guidelines give them a roadmap, which they really have not had with Sjögren’s syndrome. I think that has been frustrating to rheumatologists, because some of the cases are complicated, and [rheumatologists] may not always know what to do.”