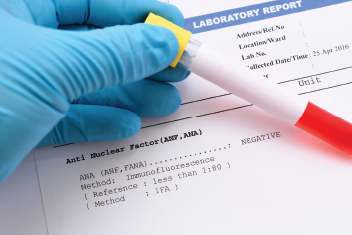 How laboratories define a serological hallmark of systemic lupus erythematous and which assays they use to detect it could contribute to misclassification of patients identified as anti-nuclear antibody (ANA) negative, according to researchers.

Most people who have lupus test positive for ANAs as part of an immunology screening for autoimmune disorders. The presence of ANAs is considered an important lupus classification criterion, but some patients are misclassified because their test results are considered ANA negative, say the authors of a study published recently in Arthritis Care & Research.

“ANA positivity is traditionally defined as the presence of an indirect immunofluorescence (IIF) staining pattern localized to the nucleus, while isolated cytoplasmic and mitotic cell patterns (CMPs), although staining positive by IIF, often are not reported or classified as ANA positive and are not included in the ANA test reports by some laboratories,” states the article.

Test results can vary among labs for different reasons, including what types of assays are used, says Dr. Choi. In addition, insurance reimbursement policies may prompt some labs to skip checking for CMPs altogether and only test for nuclear patterns, she says.

The result of the misclassification is that some patients who actually have lupus may be overlooked and go undiagnosed or may not qualify for clinical trials, says Dr. Choi. To get a better handle on how often this happens, researchers studied the prevalence of IIF anti-cellular antibody staining among patients at inception of lupus, relevant because ANA testing is usually ordered at the beginning, when doctors are trying to make a diagnosis, she says.

“It’s also believed that the ANA can change over the disease course, so we wanted to study patients near the time of diagnosis,” says Dr. Choi.

The study looked at patients who were considered ANA positive if their lab test showed a nuclear pattern, as well as other patients who had ANA with cytoplasmic and mitotic patterns only.

All tests from the study were conducted at one central lab, the Mitogen Advanced Diagnostic Laboratory at the University of Calgary.

“We wanted to standardize everything to one location” because of the variability that can exist between centers and different assays, says Dr. Choi.

Study results revealed that out of 1,137 newly diagnosed lupus patients, the majority or 92% (1,049) were ANA positive, according to the article. Among the remaining patients, 6.2% (71) were anti-cellular antibody negative and 1.5% (17) had an isolated CMP.

The findings reveal that given the traditional definition, patients from the latter group would identify as ANA negative, even though they have antibodies directed against a variety of CMP targets, the article states.

“So these patients may have been misclassified as ANA negative,” says Dr. Choi.