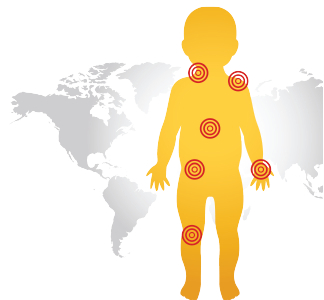 CHICAGO—The treatment of patients with juvenile idiopathic arthritis (JIA) is historically directed by clinical subtype. During a session at the 2018 ACR/ARHP Annual Meeting, speakers addressed the biological classification and treatment of JIA, discussing draft guidelines and recommendations, the impact of computer modeling on identifying JIA subtypes and subgroups of chronic arthritis.

Timothy Beukelman, MD, MSCE, associate professor of Pediatrics at the University of Alabama, Birmingham, opened the session by presenting the draft ACR and Arthritis Foundation guideline for the treatment of JIA. Although currently in draft form, significant changes to the recommendations are not anticipated during the approval process, Dr. Beukelman explained. The guideline reflects new developments in polyarthritis, including newly approved treatments and studies examining the effects of initial treatment choices. It also has an increased emphasis on sacroiliitis and addresses enthesitis for the first time.

The guideline also makes subsequent therapy recommendations for polyarthritis. In patients with low disease activity, escalation of therapy is conditionally recommended over no escalation. Such escalation may include intra-articular glucocorticoid injection or an increase in the dose of, or a change in, DMARD or biologic therapy. For patients with moderate or high disease activity after the first tumor necrosis factor (TNF) inhibitor, the guidelines conditionally recommend switching to a non-TNF inhibitor biologic.

Next, Rae S.M. Yeung, MD, PhD, professor of Pediatrics, Immunology and Medical Science at the University of Toronto, Canada, described approaches for identifying novel, biologically based JIA subtypes using computer modeling. She explained the computational approaches were designed to address the challenges of rare diseases, such as JIA, that have heterogeneous phenotypes but small patient numbers. This heterogeneity includes clinical phenotype, response to treatment and clinical course. Fortunately, clues for resolving heterogeneity by including biology exist, and machine learning appears to be successful at deciphering them.

Dr. Yeung and colleagues used computer modeling to classify JIA. Their systems-based approach evaluated the millions of data points available from integrating clinical and biologic data and placed patients into homogeneous categories.1 The study used the Immunochip array to genotype patients with rheumatoid factor (RF)‐positive polyarticular JIA (n=340) and controls (n=14,412).The discovery phase cohort included phenotyped patients who had been followed for up to five years.

Using these composite variables, the investigators clustered patients into new groups that had an enhanced ability to resolve patient heterogeneity. When Dr. Yeung and colleagues titrated the P value of the ability of the variables to the distinguish the patient clusters from each other, they found machine learning outperformed the International League of Associations for Rheumatology (ILAR) criteria and had an enhanced ability to resolve patient heterogeneity. The computational approaches were also able to identify the relationship between clusters and ILAR subtypes, as well as dissect and split the ILAR subtypes based on biology.

Next, Dr. Yeung and colleagues asked if these novel disease clusters could be used to predict clinical disease trajectories. All the patients in their discovery cohort were treatment naive, except for NSAIDs. When they looked at the individuals based solely on ILAR criteria, researchers saw a mixture of patients, some who got better and some who got worse. However, when they split the cohort into groups based on biologically based criteria, they were able to do a much better job predicting clinical course.

The work is well positioned to enable precision medicine, generate knowledge and impact care at the bedside.

Peter A. Nigrovic, MD, director of the Center for Adults with Pediatric Rheumatic Illness at Brigham and Women’s Hospital, Boston, ended the session with a presentation on the use of genetics for identifying subgroups within arthritis. He presented evidence that arthritis transcends the pediatric/adult boundary such that the arbitrary cutoff of age 16—the cornerstone of current classification between JIA and adult arthritis—obscures disease biology.2

Dr. Nigrovic outlined an alternative method employing genetic data to identify groups within inflammatory arthritis, beginning with the human leukocyte antigen (HLA) locus on chromosome 6 and then proceeding to the many other loci implicated in arthritis by genome-wide association studies (GWAS). Specifically, he described SNP-seq, a new method published in Nature Genetics for the experimental identification of single nucleotide polymorphisms (SNPs) and other variants that function not by altering protein sequence, but instead by changing gene expression.3

Reflecting on the long road to understanding the mechanistic implications of GWAS data, Dr. Nigrovic noted, “figuring this [method] out is the next Holy Grail.”