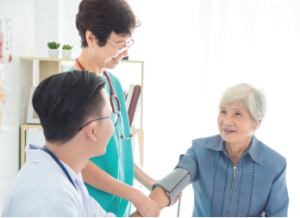 Out of necessity he turned to APCs, figuring out ways to utilize their abilities to enhance his practice. “They have absolutely made our practice better, and my patients have embraced them,” Dr. King says. “In order to see as many patients as we do, it’s a vital part of our practice.”

He works with two nurse practitioners currently, and the practice schedules 75 patients and sees six new patients each day. “I see between 50 and 55 patients a day myself,” Dr. King says.

The key, he says, is to utilize health professionals well. For example, he looks for people he can trust to perform at the highest levels of their skill sets. He trains his nurse practitioners for at least six months, having them spend time at his side as he sees patients. He gives lunchtime lectures on medication safety and disease management, and he entrusts his clinicians to engage in self-study.

“They take advantage of the rheumatology training modules through the ARHP,” says Dr. King, who also requires all of his providers to join the ARHP and encourages them to get involved in committees and other opportunities.

“The ARHP is a value-added enterprise; our APCs get much more than they give,” he says.

Dr. King shares some of the other lessons he believes account for his practice’s successful integration of APCs. One of the biggest, he says, is to not be in a hurry: “The rheumatology learning curve is very steep.”

In addition, Dr. King has engaged his APCs in scoring referrals from other providers in the community, sending referrals back on patients who have not had a history taken, a physical exam performed and labs and/or X-rays completed.

“The quality of our referrals has gotten better,” says Dr. King. “We are not wasting our resources seeing patients who don’t need to be seen by a rheumatologist.”

Life is never dull for Dr. King, a self-described gym-rat who also enjoys travel—adding side trips to work trips whenever possible—and tracing his family’s genealogy. “I am Type A,” he says. “If you look that up in the dictionary, you’ll find a picture of me. I like to stay very busy.”