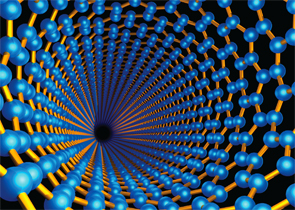 Nanotubes can penetrate the dense cartilage extracellular matrix, translocate into the cytoplasm of the chondrocytes and deliver mASO, and have staying power.
Forance/shutterstock.com

SAN FRANCISCO—Penetrating the dense extracellular matrix of cartilage is a challenge for administering osteoarthritis drugs, but an answer might lie in the matrix itself—in particular, its electrical charge, researchers reported at the 2015 ACR/ARHP Annual Meeting.

Investigators at the Massachusetts Institute of Technology have found—at least in vitro and in animals—that delivering drugs on particles with an electrical affinity for this extracellular matrix (ECM) appears to overcome these barriers.

In cartilage ECM, aggrecan aggregate forms a kind of gel that fills up the spaces between collagen fibrils, said Alan Grodzinsky, ScD, professor of biological, electrical and mechanical engineering at MIT, who led the research.

“Any therapeutic that you’re trying to get to the cell or [to deliver] intra-cellularly has to wind its way through this matrix,” he said. “It’s very tough to get through.”

Intra-articular administration of the drug alone is not good enough; the drugs clear out of the joint space too quickly to have the intended effect.

But by using so-called charged nano-carriers, drugs can be delivered with rapid penetration and then bind to the ECM inside the cartilage. When that happens, Dr. Grodzinsky said, “the matrix becomes an intra-tissue depot delivery system rather than hindering transport into the tissue.”

Research carried out by Post-Doctoral Associate Ambika Bajpayee, PhD, turned to avidin, a protein with a high positive charge—attractive due to its size and because of the high negative charge of cartilage extracellular matrix.

In vitro studies showed that avidin had an uptake that was 400 times higher than its neutral counterpart, NeutrAvidin, in bovine cartilage as thick as human cartilage, and that more than 90% of the avidin that was absorbed remained in the cartilage for at least 15 days.1

‘There is still much room for improvement with the use of nanoparticles in drug delivery—particularly by specifically identifying ligands & receptors that could help promote particle & drug transport.’ —Dr. Bottini

“The avidin that was present upstream of the cartilage got sucked right in,” Dr. Grodzinsky said.

Subsequent case studies on rats and rabbits showed deep penetration and demonstrated the importance of cartilage thickness in retention of the particles.2,3

“Once you’ve loaded this material inside, due to electrostatic attraction, it leaves the cartilage at a rate that will depend on thickness,” he said.