You are here: Home / Articles / A Deep-Dive Discussion with the Author of a Systemic Scleroderma Study
Print-Friendly Version / Save PDF 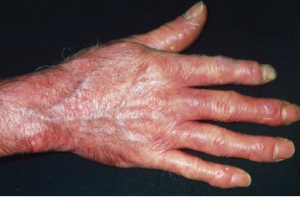 “You have systemic sclerosis,” says the physician.

Other somber words patients may hear the day they learn their diagnosis include, “rare, chronic, no treatment.” But a ray of hope could soon enter those exam rooms thanks to research conducted by a team from the UK.

Rizgar A. Mageed, PhD, FRCP, FRCPath, is professor of experimental immunology at the Centre for Experimental Medicine and Rheumatology at Queen Mary University of London. His most recent study, “Association of Defective Regulation of Autoreactive Interleukin-6-Producing Transitional B Lymphocytes with Disease in Patients with Systemic Sclerosis,” appears in the March 2018 edition of Arthritis & Rheumatology.1

Dr. Mageed discusses what he’s learned with The Rheumatologist.

“Systemic sclerosis (SSc) is a disease with no cure and a high rate of mortality,” Dr. Mageed says. “One significant feature is fibrosis that emanates from an excessive deposition of proteins in the extracellular matrix of the skin and visceral organs that ultimately damage the skin, cardiovascular system and lungs. The disease is associated with autoantibodies … so in scleroderma patients, the immune system produces antibodies that don’t kill pathogens but attack self-proteins.

“The important thing about autoantibodies in patients with SSc is that some have skin involvement, others have lung involvement [and others involve] the cardiovascular system … and the type of autoantibodies seems related to the [patient’s] distinct symptoms and organ involvement,” Dr. Mageed continues. “The role of these antibodies in causing the disease is that they appear prior to the disease onset. But we know little about the origin of autoantibody-producing B lympho­cytes, [or] why they are activated. [In our study], we set out to determine the mechanisms that could contribute to the generation of disease-causing B cells, and to find out more about how B cells contribute to disease in SSc patients.

“Some clinicians have tried using biological agents that eliminate all B lymphocytes, finding that some patients benefit clinically but others do not,” he says. “This is further confirmation that B lymphocytes do play an important disease-causing role in scleroderma.

“In healthy individuals,” explains Dr. Mageed, “immune cells are well regulated, [so they] are not making autoantibodies because of immunological tolerance, the process whereby healthy individuals make lymphocytes and those that seem risky are deleted. In SSc, however, patients have B lymphocytes that recognize self-proteins and make autoantibodies.”