You are here: Home / Articles / Alterations in Macrophage Activation May Signal a Lupus Flare
Print-Friendly Version / Save PDF 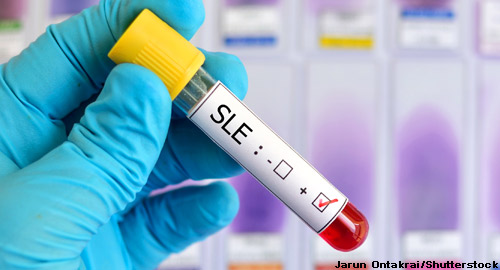 Rheumatologists lack a definitive diagnostic tool to determine whether a patient has systemic lupus erythematous (SLE) and/or when a patient will experience a lupus flare. New data suggest myeloid cells in SLE patients skew B and T cell activation status toward the M1 state, thereby directing flares and remission. The genomic signatures of myeloid cells appear to correlate with and successfully predict SLE disease activity. Although altered myeloid cells gene expression is characteristic of both active and inactive SLE, disease activity was associated with a shift in myeloid cell activation toward the M1 proinflammatory phenotype. The research by Adam C. Labonte, PhD, staff scientist at AMPEL BioSolutions LLC, Charlottesville, Va., and colleagues was published in PLoS One.1

“Here we describe a comprehensive, bioinformatic approach to identify cell type-specific patterns of genetic variation among active and inactive SLE patients and to identify high-priority candidate compounds for drug repositioning efforts,” write the authors in their discussion. “Whereas bioinformatic analysis is often used to supplement studies of SLE pathogenesis in murine models or in vitro, our work represents a novel big data strategy of applying these techniques to patient-derived data in order to identify constellations of genes that might determine clinical outcomes in specific patients.”

Researchers performed all their analyses within two Gene Expression Omnibus datasets (GSE10325 and GSE38351). They began with the discovery that myeloid cells in both active and inactive SLE patients have a considerable number of differentially expressed genes compared with healthy controls.

“Our analyses of M1 and M2 signatures indicate that, although there is overlap, M2 gene expression is more prominent in inactive SLE patients, whereas M1 gene expression is highly enhanced in active SLE patients,” write the authors. “This confirms several recent studies that have investigated the roles of Mϕ polarization and DC activation in SLE-like conditions: overabundance of proinflammatory M1 Mϕ and decreased expression of the M2 marker CD206 were detected in both lupus-prone mice and SLE patients, and therapeutic stimulation of M2 polarization significantly decreased disease severity in an induced murine SLE model. However, experimental intervention in M2b polarization, as well as microRNA array profiling, suggest that M2b Mϕ may contribute to SLE severity, indicating that the relationship between Mϕ polarization and lupus progression is more nuanced than it appears at first glance.”

When the researchers used gene set variation analysis to compare expression patterns with their Biologically Informed Gene Clustering database, they found differences in upregulated myeloid cells pathways from patients with active and inactive SLE mirrored and reinforced the M1/M2 signatures observed in the differentially expressed genes. Furthermore, upstream regulator analysis using Ingenuity Pathway Analysis further confirmed this conclusion. However, when researchers attempted to identify biological upstream regulators empirically, they were able to identify several regulators unique to the inactive or active cohort, but were unable to discover polarization-related genes.