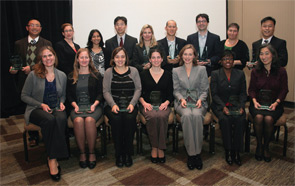 The ACR Research and Education Foundation (REF) is continually evolving its portfolio of awards and grants, looking for new ways to develop careers in rheumatology and to support targeted research in the rheumatic diseases.

In 2009, the REF initiated the ACR REF Rheumatology Investigator Award (RIA), which supports junior investigators as they are developing a project that will compete for NIH funding.

Although funding is awarded for three years, funding for the second and third years is contingent upon evidence of progress toward federal funding, ensuring that awardees are advancing toward that goal.

Of the three recipients who received the award in 2009, two went on to receive NIH funding and the third is in the last year of funding from the RIA award. Since the RIA’s inception, 18 investigators engaged in basic science and clinical research in the rheumatic diseases have received NIH funding.

Alexis Ogdie-Beatty, MD, instructor of medicine at the Rheumatology Division at the University of Pennsylvania in Philadelphia—whose research uses population-based studies to focus on the relationship between major adverse cardiovascular events and psoriatic arthritis—just completed her first year of funding from a RIA.

“The RIA has made it possible for me to begin building my career and to get started on the work I’ve been eager to pursue,” she says. “With the protected time provided by the RIA, I’ve been able to apply for and secure small project grants. In addition, I’ve submitted an NIH K23 application using preliminary data obtained via the RIA grant.”

The RIA award provides funding for the period between the completion of a postdoctorate fellowship training and establishment as an independent investigator—support at a critical time in researchers’ careers.

“With the changing funding climate, awards like the RIA are critical to the development of young investigators in rheumatology, since they give us the first leg up in the path to attaining NIH funding,” Dr. Ogdie-Beatty says.

“Funding from the ACR REF Rheumatology Investigator Award provides substantial salary and project support for my current work to establish a longitudinal cohort study of young adults with childhood-onset SLE,” Dr. Hersh says. “The support I received from the REF has been instrumental in shaping my career in pediatric rheumatology. I’m indebted to the REF for supporting the work of junior investigators and for providing much-needed funding during a pivotal period in the development of a career in academic medicine.”