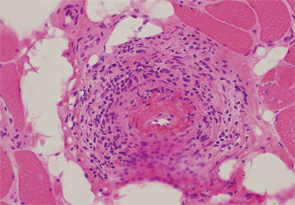 She improved progressively and currently has no peripheral neuropathy or myopathy. Her pulmonary involvement has been stable. However, over time, there has been more extensive cutaneous sclerosis and the development of more digital ulcers.

A large, well-demarcated ulcer along the medial malleolar area is shown in a patient with systemic sclerosis. Such ulcers are associated with small-vessel vasculitis.

A recent publication by the French Vasculitis Study Group identified nine patients with SS and vasculitis.2 Another study described the characteristics of a series of 40 patients with SS and associated systemic vasculitis, finding that the main clinical manifestation was a rapidly progressive glomerulonephritis (83%), followed by alveolar hemorrhage (28%), limb ischemia (13%) and skin vasculitis (10%).3

The patient improved after immunosuppressive therapy. She has not experienced a new outbreak of vasculitis, although her cutaneous disease related to scleroderma has progressed.

Acknowledgments: The authors would like to thank Martin J. Smyth for his help in correcting their English.