The most effective treatment of CIPS is modification of the immunosuppressive regimen.

Further workup of this elevated bone-specific alkaline phosphatase included a bone scan and magnetic resonance imaging (MRI) of both knees (see Figure 3). The bone scan showed increased bilateral symmetric uptake in his knees and ankles (see Figure 4). An MRI of his knees revealed evidence of small effusions and mild bone marrow edema over the tibias, bilaterally.

Septic arthritis, myositis, osteomyelitis and inflammatory arthritis were considered; however, they were believed to be unlikely given the lack of typical clinical features. The normal neurological and vascular examination, absence of vasomotor instability, and trophic skin changes made complex regional pain syndrome less likely. 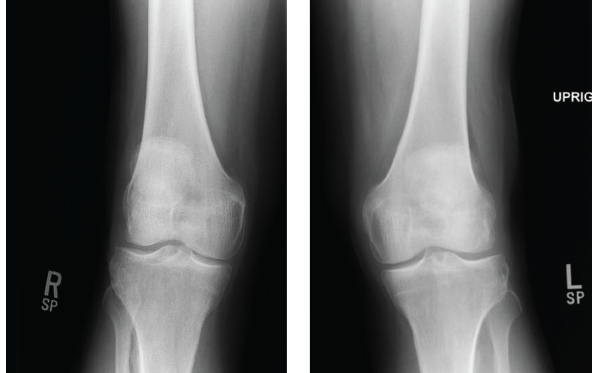 Because of the temporal relationship between the transplant and the onset of his complaints, iatrogenic causes were then investigated. The onset of his complaints correlated with when he was placed on cyclosporine. Additionally, the constellation of elevated, bone-specific alkaline phosphatase, the abnormal bone scan and the MRI findings were all consistent with CIPS.

Subsequently, we attempted a trial of cyclosporine cessation and leg elevation. However, the patient did not tolerate alternate agents of immunosuppression for transplant, including mycophenolate mofetil, sirolimus and everolimus, due to a variety of side effects. The transplant team then restarted cyclosporine at a lower dose with close trough monitoring, and we added nifedipine and pregabalin to his regimen for pain control for CIPS.

Several months later, his symptoms impr-oved and he was able to walk comfortably.

Figure 3: MRI of the Knee
The MRI revealed evidence of small effusions and mild bone marrow edema over the tibias, bilaterally.

CIPS was first described in the early 1990s as post-renal transplant distal limb bone pain, but was recognized as a distinct post-transplant pain syndrome in a 2001 paper by Grotz, et al.2,4,5 Typically, a temporal association exists between the initiation of calcineurin inhibitors and the onset of symptoms.

Because of the increased frequency of use of calcineurin inhibitors for post-transplant immunosuppression, CIPS has most frequently been chronicled in patients who undergo kidney, heart, lung, liver, pancreas or bone marrow transplantation. It has also been described in patients on CNIs for the treatment of psoriatic arthritis, Still’s disease, Crohn’s disease and ulcerative colitis.6-9

Patients usually present with symmetric, bilateral pain in the lower extremities, usually involving the knees, feet and the ankles. Physical examination is usually normal. An elevated bone-specific alkaline phosphatase may provide a useful laboratory clue.10 The typical radiological signs of CIPS include normal X-rays (or evidence of mild patchy osteoporosis), increased radiotracer uptake in the affected bones and joints on bone scintigraphy and patchy bone marrow edema visible on MRI.2,11

In some, but not all, studies, the severity of pain correlates with elevated CNI trough levels.2,10,12,13 However, most patients report symptomatic improvement with reduction in CNI levels.11