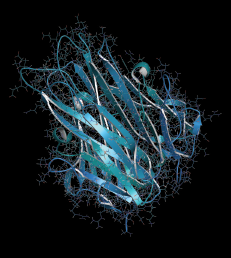 A 3D rendering of a TNF alpha cytokine protein molecule, such as infliximab, adalimumab, certolizumab and etanercept.
molekuul_be/shutterstock.coma

The findings were reported at the 2016 ACR/ARHP Annual Meeting in an abstract session that also included reports on osteoporosis care for rheumatoid arthritis patients and tofacitinib for psoriatic arthritis.

In 2009, the FDA began labeling TNF (tumor necrosis factor) inhibitors with a warning that lymphoma and other malignancies have been reported in children and adolescents treated with them. Studies looking at cancer rates in JIA have typically included very few patients taking TNF inhibitors, but retrospective studies examining the issue have found no link between the drug and cancers.

In the study led by the University of Alabama at Birmingham, data were drawn from the U.S. Medicaid Analytic eXtract (MAX) data set from 2000 to 2010 and from U.S. Truven MarketScan claims data from 2010 to 2014.

The analysis included 27,038 JIA patients followed for a median of 1.4 years and an average of about four years. A total of 3,297 of the patients took TNF inhibitors.

Researchers found there were 20 incident malignancies—not counting nonmelanoma skin cancers—in the JIA population as a whole, which had a standardized incidence ratio of 2.4 compared with what is expected in the general population, based on Surveillance, Epidemiology, and End Results (SEER) data. There were seven incident malignancies among those taking TNF inhibitors—an SIR of 2.9 compared with what would be expected for the general population.

“The diagnosis of JIA was associated with a subsequent increased rate of malignancy irrespective of treatment,” he said. “Malignancy rates following treatment with TNF inhibitors were similar to rates among JIA patients who did not receive TNF inhibitors.”

In another study, researchers showed for the first time that the JAK inhibitor, tofacitinib, is effective in patients with psoriatic arthritis (PsA) with active disease who have had an inadequate response to conventional synthetic disease-modifying (csDMARD) therapy. The study was sponsored by Pfizer, the drug’s manufacturer.