Clinically amyotrophic dermatomyositis (CADM), a subset of dermatomyositis (DM), is a rare autoimmune disease characterized by typical DM cutaneous findings (e.g., heliotrope rash, Gottron papules, Gottron sign) without evidence of myositis.1 The incidence of DM and CADM is approximately 9.63 per 1 million people and 2.08 per 1 million people, respectively.2 The association with development of interstitial lung disease (ILD) and an increased risk of malignancy highlights the importance of prompt diagnosis, disease management and appropriate malignancy screening.

Due to the rarity of CADM, hetero­geneity of disease manifestation and recalcitrant nature of the disease, treatment remains challenging; possible overlap with other autoimmune diseases complicates management. However, the advent of immunotherapy has introduced new possibilities in modifying disease progression.3

Here, we describe a case of a patient with CADM, associated ILD and concurrent rheumatoid arthritis (RA) who was successfully treated with a combination of conventional and biologic therapy.

Our patient is a 65-year-old woman who works as a fitness instructor. She had no significant past medical history prior to presenting for rheumatological evaluation with a three-month history of rash, and bilateral hand swelling and pain. Her initial symptoms manifested as non­blanching, erythematous, papular lesions along the palmar aspects of the hands and digits, along with periungual erythema. These symptoms resolved after a few weeks, but returned after a month, this time with a new, annular, hyperpigmented patch on the upper left cheek as well. The patient also experienced diffuse swelling, pain and morning stiffness of the proximal and distal interphalangeal joints of the hands. She noted the development of constitutional symptoms, including fatigue and a 30 lb. weight loss, as well as progressive shortness of breath, subjective weakness of the upper extremities and new-onset Raynaud’s phenomenon. 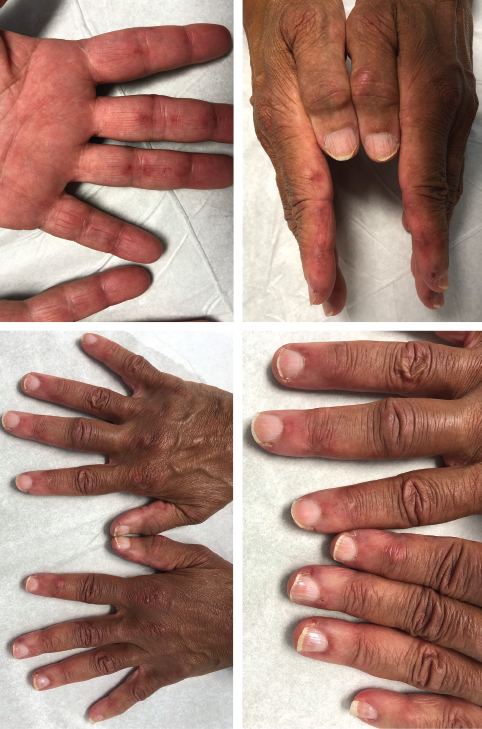 The initial physical examination was significant for a nonblanching, papular rash along the palmar aspects of the hands and digits, periungual erythema, and edema and tenderness of the proximal and distal interphalangeal joints of the hands.

The patient went to the emergency department multiple times for these symptoms, which improved with short courses of prednisone, but recurred each time after completion of treatment. A chest X-ray was consistent with hyperinflation of the lungs, with apparent scarring of the bases. A computed tomography scan (CT) of the abdomen and pelvis showed an 8 mm enhancing lesion in the right hepatic lobe, suggestive of a hemangioma, as well as streaky opacities in the bilateral lung bases. Autoimmune workup showed an erythro­cyte sedimentation rate (ESR) of 28 mm/hour, no elevation of C-reactive protein, rheumatoid factor (RF) of 37.9 IU/mL, anti-cyclic citrullinated peptide (anti-CCP) antibody >250 u/mL, and undetectable anti-nuclear antibodies, anti-double stranded DNA, anti-Smith and anti-RNP antibodies (see Table 1, opposite).

At the time of the initial rheumatological evaluation, the patient remained significantly symptomatic, with persistent rash and severe hand and knee joint swelling and pain. Further workup showed elevated ESR of 45 mm/hour, normal creatinine kinase and aldolase levels, negative anti-Jo-1 antibody, and increased kappa and lambda light chains with preserved ratio and mixed glomerular and tubular proteinuria on serum and urine protein electrophoresis. X-rays of both hands showed sclerosis, lucencies of the lunates and degenerative changes without apparent erosion.

The patient was started on 200 mg of hydroxychloroquine daily, along with 40 mg of prednisone daily, for treatment of RA. Additional immunosuppressive therapy was held, pending further pulmonary and hematological investigations and age-appropriate cancer screening.

An extensive workup was carried out to better characterize the disease and rule out possible concurrent systemic processes. Compared with the CT of the abdomen and pelvis performed one month before, chest CT images showed significant progression of her pulmonary disease, including diffuse nodular and coalescing opacities involving the lungs fairly symmetrically, from the pulmonary parenchyma, subpleural upper lobes, portions of the middle lobe and the lingula to the bibasilar regions. No suspicious or dominant nodules were apparent.

Bronchoscopy and lung biopsy showed nonspecific inflammation. Hematological and oncological investigations, including an unremarkable bone survey and negative colonoscopy and mammography, pointed to the diagnosis of monoclonal gam­mopathy of undetermined significance.

Taken all together, these findings were consistent with CADM with associated autoimmune ILD and no evidence of amyloidosis, infection or malignancy.

The patient was continued on 40 mg of prednisone daily and prophylactic trimethoprim and sulfamethoxazole; she was also started on 500 mg of mycophenolate mofetil (MMF) twice daily one month afterward (following the aforementioned testing), with the goal of titrating up to 3,000 mg daily for optimal control of her pulmonary disease.

Her shortness of breath, rash and synovial pain significantly improved on this regimen, but the rash and joint symptoms recurred with the tapering of prednisone. Thus, rituximab was initiated at 1,000 mg on days 1 and 15, and every six months thereafter, which has helped maintain adequate control of her joint and pulmonary symptoms.

At follow-up six months from the initial rheumatological evaluation, the patient continues to do well on this regimen, with successful taper of prednisone down to 5 mg daily, and discontinuation of prophylactic antibiotics.