A cervical spine radiograph (Image 1) was remarkable for the presence of flowing ossifications bridging the anterior margins of the C2-C6 vertebra, with a relative lack of disc space narrowing. A radiograph of the lumbar spine (Image 2) demonstrated mild intervertebral disc space narrowing with marginal osteophytes and end plate sclerosis at T12–L1 and L1–L2.

An MRI of the pelvis without gadolinium (Images 3a and 3b) demonstrated bridging anterior ossifications along the left sacral iliac joint with only mild chondral loss and reactive bone marrow edema pattern. There were no bone erosions.

Image 3a: MRI of the sacroiliac joints. Panel A shows a proton density oblique coronal image demonstrating bridging ossifications along the anterior aspect of the left sacroiliac joint (black arrow) with only minimal chondral thinning within the joint itself. Panel B shows a fat-suppressed T2-weighted image of the same region, demonstrating no areas of synovitis, subchondral bone marrow edema or erosion to suggest an inflammatory arthritis. 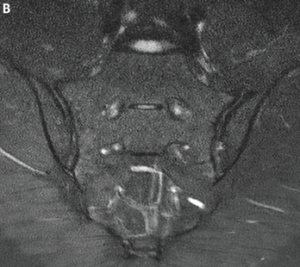 The differential for this patient included ankylosing spondylitis (AS); synovitis,
acne, pustulosis, hyperostosis and osteitis (SAPHO); diffuse idiopathic skeletal hyperostosis (DISH) and retinoid hyperostosis (RH). DISH is clinically synon­ymous to RH except that in RH an etiology has been established.

Because of the patient’s extensive isotretinoin history and the extensive anterior ossifications of the cervical spine, he was thought to have RH from isotretinoin. Clues on history suggesting RH included severe acne requiring prolonged intensive medical treatment. His history of back pain had some inflammatory features, but notably his pain failed to improve with activity or non-steroidal anti-inflammatory drugs, which are key features of inflammatory back pain (Box 1).

The patient’s insulin resistance, suggested by acanthosis nigricans on the back of his neck, also points toward hyperostosis. Insulin resistance has been documented as a risk factor for DISH and, therefore, likely a risk factor for RH as well.1 Lastly, while patients with SAPHO exhibit pustular acne and hyperostosis, these patients typically have chest wall involvement, whereas this patient has predominantly cervical spine involvement. SAPHO is a diagnosis of exclusion, whereas in this patient, isotretinoin was considered the likely culprit for his symptoms.