You are here: Home / Articles / Case Report: Not All Crystals Are Gout
Print-Friendly Version / Save PDF

A 29-year-old man was admitted to the hospital with bacteremia. He had a complex medical history, which included an orthotopic liver transplant at three years old, complicated by chronic rejection and tacrolimus-associated end-stage renal failure on hemodialysis for the past two years. During his admission, he developed acute, chronic pain in his hands, elbows and ankles. He localized the pain in his hands to proximal interphalangeal joints (PIPs) and distal interphalangeal joints (DIPs), bilaterally. He denied joint redness or warmth, morning stiffness, back pain, rash or ulcers. He had fever associated with bacteremia, which resolved with antibiotic therapy. He reported similar symptoms in his hands in the past, and had been treated for presumed gout with febuxostat. His other medications included low-dose prednisone, amlodipine, lisinopril, mycophenolate mofetil, omeprazole, sevelamer, tacrolimus, ursodiol and potassium chloride. He was not taking any vitamin C supplementation. Family history was notable for no known history of chronic kidney disease or autoimmune disease. 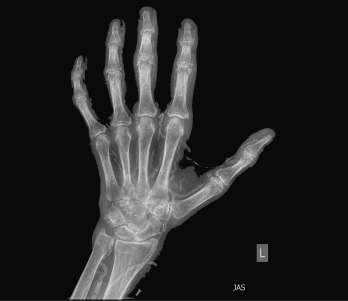 Figure 1: An X-ray of the left hand showed extensive vascular and periarticular calcification.

Physical examination revealed slightly swollen and tender PIPs. He had contractures of both elbows and pain with movement in all directions, as well as decreased range of motion in his ankles without effusion. Ultrasound of his PIP joints, ankles and the first metatarsal phalangeal joints of his feet did not reveal evidence of uric acid crystal deposition, double contour sign within the joints or tendons, or joint effusion amenable to aspiration. Radiographs revealed dense arterial calcifications in his hands and feet bilaterally, scattered juxta-articular soft tissue calcifications and no radiographic findings of gout (see Figures 1 and 2).

His uric acid (UA) prior to urate-lowering therapy was only 4.4 mg/dL (normal range: 3.6–8.5 mg/dL); after initiation of febuxostat and dialysis, his UA measured 2.4 mg/dL. He tested negative for rheumatoid factor and anti-CCP antibodies. Given the presence of soft tissue and vascular calcifications, additional laboratory test were conducted, including parathyroid hormone (42 pg/mL), calcium (9.3 mg/dL) and phosphorus (3.6 mg/dL), all of which were within normal limits. A plasma oxalate level was highly elevated at 69.1 mcmol/L (normal range: <1.6 mcmol/L), raising concern for the diagnosis of oxalic acid arthropathy. His daily dose of prednisone was increased to 30 mg (which improved his joint pain and swelling) with the goal of renal transplant in the future.