The patient was referred to a cardiologist after his initial presentation, and ultimately the patient deferred admission for pericardiocentesis, preferring outpatient therapy with non-steroidal anti-inflammatory drugs (NSAIDs) and colchicine for presumed restrictive pericarditis.

At his one-month follow-up appointment, the patient reported the intervals between bouts of shortness of breath, associated with new-onset hypoxemia, were shorter. Cardiac magnetic resonance imaging (MRI) was obtained on an emergent basis. It demonstrated thickening of the visceral and parietal pericardium with a moderate effusion, concerning for worsening of his previously demonstrated restrictive pericarditis. The MRI was also notable for mild left ventricular hypokinesis. Consequently, the patient was admitted to the cardiology unit for a right and left heart catheterization. Intrathoracic intraventricular dissociation and a positive Kussmaul sign consistent with restrictive physiology were noted.

A surgeon was consulted to discuss a potential pericardiectomy, but the procedure was considered to be high risk for the patient given concurrent active inflammatory disease and his known history of interstitial lung disease with a new left-sided effusion of unclear etiology.

The patient subsequently had a thora­centesis performed. The fluid studies showed a lactate dehydrogenase (LDH) level of 1,886 IU/L, protein of 4.6 g/dL and glucose <2 mg/dL. The infectious workup was negative. The results were consistent overall with an inflammatory effusion likely secondary to his poorly controlled RA. 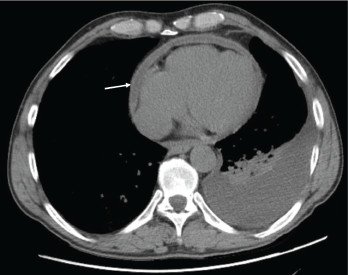 Figure 1: Pericardial effusion demonstrated on a CT of the chest. The arrow indicates the effusion.

With the input of the rheumatologist, the patient was started on rituximab infusions, and after two infusions of 1,000 mg eight weeks apart, the patient’s symptoms had resolved, his echocardiogram and inflammatory markers had normalized, and a repeat computed tomography (CT) of his chest (see Figures 1 and 2) demonstrated near-total resolution of his pericardial thickening.

The patient is currently asymptomatic and continues to receive rituximab infusions as needed (every six or 12 months) while on long-term, low-dose prednisone.

Left untreated, RA is progressive and can lead to deterioration of cartilage and bone in the affected joints, ultimately leading to permanent disability. Involvement of extra-articular tissue occurs in approximately 40% of patients with RA and is associated with a higher mortality.1

Symptomatic pericarditis secondary to RA is uncommon, occurring in less than 10% of RA patients, but approximately 30–50% of patients have evidence of pericardial involvement on autopsy. 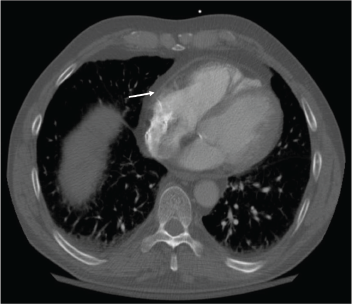 Figure 2: Resolution of the pericardial effusion was indicated on the chest CT obtained two months after initiation of rituximab infusions.

Symptomatic pericarditis secondary to RA is uncommon, occurring in less than 10% of RA patients, but approximately 30–50% of patients have evidence of pericardial involvement on autopsy.2 Episodes of tamponade and restrictive pericarditis in RA occur infrequently, and the current literature is limited to case reports.3,4 Based on current reports, surgery is the only definitive therapy known to reverse the pericardial remodeling and tamponade physiology in this patient population, and medical therapy is thought to be largely ineffective. Thus, our case presents a potentially new therapy to address a rare, but highly morbid condition.

Recent studies support a potentially effective role for rituximab in patients with active disease while on methotrexate or anti-tumor necrosis factor therapy, demonstrating that a single course of rituximab can result in clinically significant improvements in quality of life and radiographically identified disease progression within as little as 24 weeks.5 These studies were limited to patients with active articular disease, but based on our patient and his rapid recovery after initiating rituximab infusions, it is possible that anti-CD20 therapy could be a potential surgery-sparing alternative for patients with life-threatening pericardial disease.